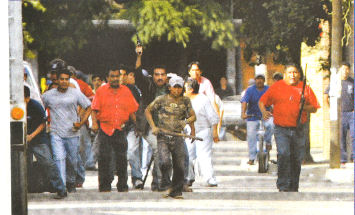 MEXICO CITY-Brad Will filmed his own murder. Holding a professional, high-definition digital camera neck-high in his two hands, he faced down Juarez Avenue, the camera rolling.

He stood amidst the protesters from the Oaxaca Peoples’ Popular Assembly, or APPO, as they attempted, with rocks and bottles, to repel the armed attack of police and local officials trying to dislodge the thousands of people assembled in a months-long occupation of Oaxaca City in 2006.

Down Juarez Avenue, state and municipal police and officials fired on the protesters with handguns and rifles. Raul Estrella, working for the Mexican national daily El Universal, photographed them shooting. In his photographs we see Pedro Carmona, Juan Carlos Soriano Velasco, Orlando Manuel Aguilar Coello, Abel Santiago Zarate. They have names and their names are known.

Brad Will filmed it and in the last frames of video before the bullet hits him, no one steps up to him; no one enters the frame.

A trace of the bullet may be captured only with professional digital editing equipment appearing as a hazy smoke trail across the screen. There for everyone to see, both what is missing and what is not. What is missing: an assailant stepping toward him and firing a shot into his chest at close range. What is there: the bullet and its fatal impact.

The video tells the story: filming among the protesters, he was killed by a shot coming from down the street, from where the police and armed municipal officials had been shooting for over an hour, men such as those caught in Estrella’s photographs. In the last frames of video before the bullet strikes, the camera angle captures the full scene, from wall to wall on either side of the street, and no one is there standing before him with a gun, no one.

On October 27, 2006, Brad Will, a longtime activist, poet, and Indymedia journalist who participated in actions from Oregon to New York City, from Brazil to Venezuela, was shot and killed while covering protests in Oaxaca City.

Nearly three years after his murder, the police and government officials who were photographed shooting that day are still free, still on the job. No one has been arrested in any of the 22 cases of Oaxacans murdered during the occupation of the city. Only Brad Will’s murder case is still open; all the others were dropped, “for lack of evidence.”

Then Mexican President Vicente Fox used Brad’s murder as a pretext to intervene in Oaxaca. Fox sent several thousand federal militarized police to wrest control of the city from the APPO, a mostly horizontal coalition of organizations and collectives that joined Section 22 of the National Union of Education Workers in a civil-disobedience uprising.

The unarmed APPO revolt against Governor Ulises Ruiz took control of Oaxaca City after successfully defeating a predawn state police raid on the striking teachers protest camp on June 14, 2006. From that day until late October, the APPO shut down every office of the state and municipal governments, kicked the police out of town, maintained a protest camp in the town square, and occupied and broadcast live from radio stations and statewide television stations.

As the APPO occupation grew in creativity and intensity, drawing the participation of tens of thousands of people statewide, the state government resorted to dispatching “para-police” death squads throughout the city. The APPO responded in turn with, in their own words, “social organization,” building make-shift barricades throughout the city to obstruct the passage of the death squads.

It was one of these barricades that “para-police” armed thugs attacked on October 27. Brad responded to the news, along with dozens of local, national, and international reporters, appearing on the scene with camera in hand.

Two days later, on President Fox’s orders, federal police entered the city on October 29, killing three people. Just over two weeks later, Oaxaca Attorney General, Lisbeth Cana-the person who described the death squad that roamed the streets in late August as “a clean-up operation”-called a press conference where she unveiled her “investigation” into the murder of Brad Will.

She claimed that members of the APPO told Brad to stop “taking pictures” of the confrontation and when he refused, shot him point blank with a 9mm pistol. She said that you could hear the metallic sound of the 9mm pistol being cocked on the audio track of Brad’s video. And yes, such a sound is audible.

There is a problem however: Brad was shot with a.38-caliber revolver. Revolvers do not chamber bullets by cocking; they make no cocking sound. Moreover, there were no traces of burn marks at the bullet entry wound and no gunpowder burns on his clothes. Brad was not shot at point blank range.

The doctor who performed the autopsy as well as investigators with the Mexican National Human Rights Commission and the international organization, Physicians for Human Rights, have both corroborated this fact.

But facts do not seem to be in high demand in the Mexican government’s Brad Will “investigation.” The federal attorney general’s office, which took over the case in 2007, has charged a man with Brad’s murder based on the testimony of Adolfo Feria, the cousin of the mayor of Santa Lucia del Camino, Manuel Martinez Feria, the local leader of those photographed shooting at the APPO protesters on October 27. Adolfo Feria’s testimony is not a direct eyewitness testimony, but rather, that he had heard who pulled the trigger.

The federal government arrested Juan Manuel Martinez on October 16, 2008, charging him with Brad’s murder. Martinez was supporting the APPO protesters on that day in 2006, but he was not on Juarez Street when the shooting occurred. The prosecution has not produced a single eyewitness testimony, photograph, or video image of Martinez at the scene of the crime. Between 20 and 30 professional news photographers and video reporters were present that day. Not one of them has an image of Martinez placing him at the scene.

No direct witness testimonies incriminate Martinez. Only one person who said that someone else told him that Martinez had been there. Apparently, this performance was too shabby for it was thrown out of court. Martinez, however, remains in jail. While a judge was reviewing the original arrest warrant, the federal prosecutors hit the pavement to “perfect their evidence,” in the words of Miguel Angel de los Santos, attorney for the Will family.

In July, a judge upheld the revised arrest warrant.

The government’s theory does not only implicate Martinez, but in fact charges eight other protesters as accomplices. These “accomplices” are the very people who risked their lives jumping into the line of fire to lift Brad from the street and carry him around the corner. These people appear in photographs carrying Brad away from Juarez Street and administering mouth-to-mouth resuscitation before carrying him on to a car to take him to a hospital; he died en route.

Local police and officials appeared on the front page of the national daily El Universal in photographs clearly identified shooting at protesters. None have been charged with any crime nor even suspended from their jobs.

I asked Brad’s parents, Kathy and Hardy Will, in an email about their experience with the Mexican government’s investigation over the past eight months, since they charged Juan Manuel Martinez. Here is their response: “Total frustration that the Mexican government continues to pursue an innocent person (Juan Manuel) for political reasons. He is not guilty of our son’s death!”

The Mexican government’s desire to charge an APPO supporter and its categorical refusal to even investigate the police and local officials illuminates two well-known political features of the justice system. First, courtroom justice is a tool wielded by and for the state and the political class. The Oaxaca and federal prosecutors’ unyielding ignoring of forensic evidence and witness testimonies and their fabrication of false evidence and circumstantial testimony in Brad’s case eviscerates any lingering legitimacy to their claim of the rule of law.

Second, the very brazen partiality of the government’s case forces activists and the victim’s family members to channel their time and energy into the legal process itself-the activists to save themselves from incarceration and the family to push for some shred of justice for Brad-instead of fighting the government in the streets, the media, or elsewhere.

The government cover-up of Brad’s murder also ensures similar impunity for the other 22 unsolved murder cases from the 2006 conflict in Oaxaca. Such impunity serves to divert national and international opinion away from the fact that the Oaxaca state government organized and carried out death squads for months-killing 23 people-while the federal government looked the other way.

The intentional incompetence of the state and federal prosecutors--a veritable tradition in political murder cases worldwide--is a tool to mask the farce of “the rule of law” and maintain the force behind the rule of impunity.