As The Shit Hits The Fan
The Economy is in the toilet. Flush it down!

Forget about banks and religion

The State is understood as pure and inviolable, as capable of purifying the most repulsive things--even money--through the touch of its divine hand. Money, therefore, is pure insofar as it belongs to the State; so are, by association, those experts who are summoned to serve it. Even today power reenacts that ceremony where the despot shits in honor of his subjects, summoned to laud him for the gift of his royal turd. 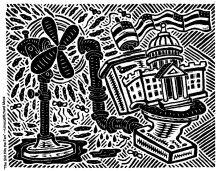 Why save Wall Street when the shit hits the fan and the economy plunges down the toilet? Let it drown in its own cesspool of toxic debt. Since money is symbolically a form of excrement, poetic justice demands that stockbrokers and bankers suffocate in their own shit. Why rely on the State and its toiletry experts to perfume the stench of crime in the suites?

You don’t need a shit detector to be suspicious of a corporatist bailout plan that redistributes wealth from the bottom to the top. While the suits-in-charge loudly bemoan the financial urgency of the crisis, they are quietly slipping the turd into someone else’s pocket.

If we actually took stock of the situation, rather than merely situating the stocks, we might rebel rather than be placated. The global capitalist economy has collapsed like a house of cards in a shitstorm. Yet, instead of celebrating the crash by dancing in the ruins, the wage slaves and their overseers are busily deciding how to shore it all up again.

Would the ancient slaves who built the Egyptian pyramids have rushed to reconstruct them if they crumbled or would they have pissed on the Pharaoh’s mummified remains? Pharaoh’s army got drownded, Obama don’t you weep. Save the stock, says Mr. Block. What a bummer, I can’t buy that hummer, says Joe the Plumber. Shit happens, says his bumper sticker.

The miserabilist trickle down facade of the outhouse economy has been hard hit by a flood of worthless credit, but the Republicrats at large continue to shovel shit against the tide and pray that prosperity is just around the corner.

Alas, if more credit could save us, then Jesus might have been a banker, instead of throwing the money changers out of the temple. Of course, Jesus was really a Jewish comedian, but not everybody got the joke. So, they made him into a savior and proceeded to resurrect the Temple of Doom, otherwise known as capitalism, complete with funds for hedges, rooms furnished with shitloads of pacifying commodities, and a foundation based upon a free market blueprint that looks sturdy when stocks are flush, but will inevitably crumble and have to itself be flushed in the end.

It’s no accident that the US dollar proudly declares, “In God We Trust.” The true religion of every capitalist is money. Filthy lucre is what makes the shitstem go round.

Forget about banks and religion

The modern monotheist devotedly worships George Washington’s shit-eating grin on the dollar bill. And, for those who can tolerate more than one god, there is always the Canadian toonie, with the queen on one side and a bear behind.

Bears and bulls can still be seen furtively skulking around in the shadows of Wall Street, begging us to continue to revere them as our sacred totems when what we really need is a blasphemous romp with the golden calf of anarchy.

Don’t save up gold in anal-retentive fashion or use it to make more gold. Let neither Jesus Saves nor Moses Invests be your credo during the Great Meltdown. Don’t wait for the royal turd to drop on your head like manna from heaven.

Forget about banks and religion, and the religion of banks. Be wasteful rather than full of waste. Squander your riches generously in mutual aid, satisfy unmarketable desires, and engage in unproductive revelry.

Ignore the bankrupt realpolitik of the election sideshow and insist on taking your wildest dreams for reality. Refuse to collude with the bevy of government economists and media talking heads who are paid to “objectively” deny that there is a turd floating in the capitalist punchbowl.

Don’t be baffled by their bullshit or dazzled by the heroic spectacle of tight-ass government intervention on behalf of the banking industry. Be a shit disturber!

To hell with the sewer security of the fecal economy, the shit we really need is the manure in our gardens with which to fertilize our autonomy.

Now is the time to get our shit together, and dump the bosses off our backs!

This piece was written in commemoration of an impromptu ceremony on Denman Island, British Columbia, where three anarchists, each armed with a hammer, took their turns smashing a book-shaped piggy bank which had the words Holy Bible imprinted upon it, while chanting down Babylon, as the shock-waves associated with the economic implosion in the States washed ashore north of the borderline.

FE note: It also appears in the collection of Ron Sakolsky’s essays, Swift Winds. See our review on page 33