How Art and Music Can Change the World

How Art and Music Can Change the World: Mecca Normal 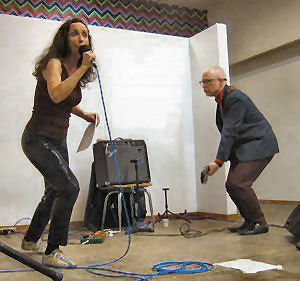 Mecca Normal is Jean Smith and David Lester--making music and art together since 1984.

Over the last 25 years, Mecca Normal has consistently turned up the heat on the theoretical relationship between music and social change by furiously stirring them together in the fiery cauldron of artistic practice. In the process, they have boldly created a unique body of work that has challenged the downpressing gravity of the authoritarian life with a yeasty combination of outrage and subversive laughter. In essence, they have defied gravity, and, in doing so, have urged us all to refuse to be held down when we could be soaring to the outer reaches of possibility, or, better yet, demanding the impossible. Their music is not designed to present us with a dry polemic on the “one-best-way” to be politically active or offer a pat answer on how to live our lives according to anybody’s party line. Instead, it is a direct call to see through the bullshit and make our own choices.

Historically-speaking, the house of Mecca Normal that Jean and David have built has been widely acknowledged as one part of the foundation of the Riot Grrrl movement which burst on the punk scene in the Nineties throwing down the gauntlet to male supremacy and laying the groundwork for Ladyfest solidarity. Before that, Mecca Normal was the spark that lit up the radical political landscape of the late Eighties with the Black Wedge tour. That tour was an anarchist antidote to the self-congratulatory left/liberal Red Wedge tour in the UK, which aimed at unseating Boss Margaret Thatcher, but ultimately led to the reign of Boss Tony Blair, who became the staunch Labour Party ally of Boss George Bush in the “war on terror.” Black Wedge, on the other hand, placed its rebellious emphasis on a politically-engaged music and poetry that wanted nothing to do with the electoral realm and focused instead on denouncing systemic abuse and countering the spectacular politics of everyday life.

Many recording artists naively, or perhaps conveniently, believe that music can only be used to change the world by trading on their own status as stars who are recruited to support the least obnoxious political candidate or who involve themselves in do-gooder charitable activities that condescendingly distance them from those that society attempts to victimize. Mecca Normal has never played such shallow celebrity games. Instead, the name of their previous record label, Kill Rock Stars, says it all. As Jean Smith once explained in an article she wrote about Black Wedge for the 1995 anthology that I co-edited with Fred Ho, Sounding Off!: Music as Subversion/Resistance/Revolution, “The Black Wedge functions/agitates in the crawlspace of resistance, under the big house of capitalism.”

And that original Black Wedge tour has provided a seminal source of experiences and ideas that have animated Mecca Normal’s music, writing and visual art ever since. Their most recent 2009 tour, whose overriding theme was “How Art and Music Can Change the World,” is a case in point. More than a mere retrospective of their work, the tour opener that I caught at the Vinegar Factory in Vancouver was a reaffirmation of their inspirational power and continuous resilience. Both Mecca Normal tours represent plateaus in relation to their ongoing commitment to cultural activism. Yet, the latter, by combining a seasoned performance-based pedagogy with a raw emotional and lyrical intensity, is the culmination (so far) of the rock solid artistic integrity that has made Mecca Normal into an underground legend in its own time.