Hoppin’ Aboard the Underground Railroad
Fiction 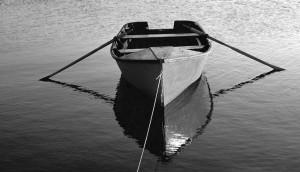 The first night after leaving their hide-out in the Vancouver Island woods, Jerry and Max climbed the drawbridge off the last ferry of the day onto what they hoped would be the safety of Inner Island and headed down the beach to avoid meeting anyone.

Inner Island bobbed comfortably in the calm waters between the mountainous spine of Vancouver Island and the mainland Coast. After the indigenous Pentlatch had been decimated by lethal doses of smallpox and colonialism, it had- been settled for the past half century by an assortment of old-time pioneer families, hippie dropouts, draft dodgers, and a scattering of retired criminals.

During the ‘nineties, pot growers, belly dancers, permaculture farmers, anarchists and sexual outlaws of all kinds further enlivened this interesting little mosaic. Of course there were some tensions, for instance between the left liberals who ran local politics and the rednecks, but overall social life was interesting and friendly and diversity was accepted as a desirable characteristic for a healthy community by most islanders. But by the turn of the century, the island was in the midst of being gentrified.

A mixed group of retired professionals, the ultra wealthy and even celebrities had discovered it. A few years after the initial invasion, and following an upscale development proposal disguised in “green” rhetoric that saw the islands wealthy population dramatically rise, the cops established their first outpost on the island in history.

Never before had this fraternity of paramilitaries sustained themselves on Inner Island. Now, however, they had a more or less permanent presence, having built themselves an addition to the local Volunteer Fire Department building where they camped out a couple of days a week. Their main duty seemed to be harassing restless teenagers, pot growers and smokers, and, of course, preventing the poor and homeless from sleeping in their vans or on unauthorized campsites. Their chief tactic was the random check.

The cops would spot a dirty old car going by with a couple of disheveled locals behind the wheel and would immediately pull them over, knowing full well that the likelihood of catching them smoking pot, driving without insurance, a license or some such infraction was high.

Of course, most vehicles on the isolated island were older ones that were kept together by backyard mechanics and friends to the best of their ability, meaning there might be a cracked windshield, a malfunctioning tail light or other minor problem that constituted a legal offense and thus reason for a run in with the law. An extremely small minority of islanders supported their presence, but the vast majority considered them to be either an unnecessary nuisance or a pack of uniformed bullies.

By sunset, the fugitives were sitting in Leah’s cabin, sipping mint tea, cozily enveloped in conversation amidst the sheltering darkness of Douglas firs.

“Hey, Leah”, said Jerry to his old friend the next morning, “Do you think it would be ok for us to go downtown with you to get a coffee at the bakery?”

“Oh, by the way,” he added, “while we’re on island, my name is Jellyfish and my partner’s handle is Motion.”

The three hopped into her car. It was a rundown old Plymouth Valiant, the one with the slant six engine that started with an ignition switch rather than with a key. Leah took the knob out of the glove compartment and turned on the radio just as the morning news was being broadcast.

First, the national and international news: bombings in Afghanistan, rising global temperatures, authoritarian leaders ruling with iron fists, another Wikileak, etc. Then, the local Valley news: arson suspected in school fire, “clean” coal mine proposed in the Beaufort Mountain Range, and police urge public to be on the lookout for dangerous escaped convicts. They described Jellyfish and Motion, using the most hyperbolic language possible and liberally peppering the news item with words like “ecoterrorist” and “violent.”

“Ya know, Jellyfish,” said Leah in a reassuring voice of defiant comradery, “to my way of thinking that luxury condo complex that you torched needed to go up in flames as a warning to all developers to back off. So, thanks!”

“Are the cops on the island today?” asked Motion warily. “I’m not sure”, said Leah, “maybe we should head back to my house. Guess there’s just no place left to hide anymore on this rock. They even put surveillance cameras on the ferry hill this year. And, the contradictions between rich and poor are getting bigger everyday. Just last month they closed down one of the little summer squatter camps on the beach.

The year before the vacant ‘downtown’ land that had been used by the local riffraff for a nightly campfire was sold. Old Pitou who had kept it going, was run off the island because he couldn’t afford to live here anymore. I sure miss that guy, but it seems that when one scene dies down another springs up in its place.”

“I once heard that there was a pirate radio station on the island,” said Motion. “Is it still around?”

“I thought we could counter some of the crap that’s being spread about me and Jellyfish,” he responded.

“No, no,” Motion cut her off, “I wouldn’t go on air as myself. I just thought it would be interesting to take a look at some of the issues: police riots, prison escapes, living on the run...you get the picture. We could look at it ‘theoretically,”’ Motion said gesturing air quotes.

“O.K.” Leah said, “I have a couple of close friends who do a show every Sunday night, so I’ll ask them if they’d like to interview you.”

“Whoa, maybe that’s too much of a security risk Motion,” Jellyfish interrupted. “How well do you know these people, Leah?”

“Well enough to have trusted them with my freedom more than once.” she answered curtly.

“That’ll do for me,” Motion said, looking toward Jellyfish who nodded in agreement.

“Sure, Motion, OK, as long as not a word about who we are is ever exchanged between us. Not a word or even a hint though,” he insisted.

That night Motion and Jellyfish met Leah’s friends at the little pirate radio station hidden away in a trailer at the edge of some woods. The four of them immediately discovered that they had a natural comfort zone, a friendly chemistry that put everyone at ease. They spent the night sharing ideas, sipping wine and laughing.

As the show came to a close and it was time to leave the radio station for the night, one of Leah’s radio friends, a wrestling teacher with a gift for passionate recitals of ancient Persian poetry, made them an offer.

“Hey, listen, folks, I’ve got a small boat with an old 1970’s Evenrude 9.9 motor. I have a week off starting tomorrow. Why don’t I take you across the Salish Sea and as far north as we can get, in say, three days? We can bring some food, a fishing rod, you know, camping gear and get you guys started on where you really need to get.”

“I would really appreciate and enjoy that, my friend,” Jellyfish added.

The next morning, after hugging Leah goodbye, the two outlaws waited for their new friend on board the small boat. He had told them to meet him at around sunrise.

“Hey dude, we’re following the North Star to freedom, just like the Underground Railroad,” Motion chortled to Jellyfish, sticking up his hand for a high five.

“Yeah, except the slaves from the States were heading to Canada to be free,” Jellyfish pointed out. “We’re wanted by the RCMP. Canada is trying to put us behind bars. But it’s a big country and there are still plenty of nooks and crannies up North where we can hide out, where surveillance cameras don’t exist, and lots of people question the whole idea of the Canadian state in the first place.

Canada may have once been to some degree a place of refuge for escaped Africans, but it had slaves of its own. The only reason it didn’t have a massive system of plantation slavery was because it’s a little too cold up here to grow cotton or sugar cane. That said, I do feel like we’ve found our underground railroad conductor though. He should be here any minute now, and this funky boat of his is the key to our freedom.”

The whole idea of them actually escaping from the police was starting to sound real to Motion now Maybe he wouldn’t have to spend the next 20 years in a cage.

“Funny, when things begin to fall into place through a combination of spontaneous encounters and solidarity, anything seems possible,” he mused.

That same combination of chance and mutual aid is always what he had found so powerful about rioting in the streets. He’d already figured out that he loved the adrenalin rush of never knowing what was going to happen next, mixed with the knowledge that whatever came his way, someone had his back. But what was a new insight for Motion was that he could experience this same kind of comradery outside of the heat of a street action.

With an unaccustomed look of joyful revelation on his face, he tried to explain this new understanding to Jellyfish.

“Leah never asked for anything from us but our stories, shared whatever she had with us freely, and hooked us up with an escape plan. I guess that’s what real hospitality is all about.” And that’s what the pirate radio station was all about too,” he realized as he spoke.

“It existed as an autonomous zone where encounters between rebels of all kinds could happen. What might grow out of these convivial occasions could be anything from an enjoyable evening spent among kindred spirits to a plan for deflecting the long arm of the law.”

The rocking of the boat quickly snapped him out of his reverie. Turning around, he realized that their drinking buddy from last night FarSee had jumped on board, and they were about to cast off into the cool blue waters. The sun had just come up, and the sky seemed clear as they wended their way toward the mainland.