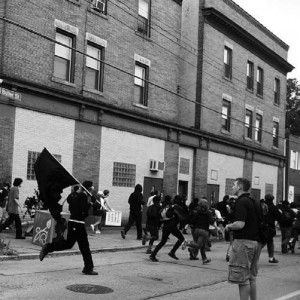 A protester raises a black flag during the Pittsburgh G20

A voice says, “Step Forward,” and we do.

We stand one heel touching the other. We are haggard. We have slept coiled next to and on top of one another for weeks, maybe months, it’s impossible to know.

We do. Our bones jut, poke, and hang from our skins. We are not fed. The woman in front of me, my forward toe touching her back heel, is my wife. We are twenty-eight and will remain twenty-eight for eternity. At this point, I can’t care. I haven’t seen my wife naked in so long I don’t recognize her anymore. There are others behind me, five total.

“Number one” The man says, meaning my wife, “Step forward, face away.”

My wife does as she is told and the man raises a gun. I cannot see him as the sun ruins the reflection of him I had been watching. My wife arches her back as though she can soften the blow she knows is coming. Her olive skin is dry and tired and I can’t hold her. My heart is dead so I feel nothing at this realization.

This is our fate, our punishment for denial of oppression. The sun sags again and I see the face of the man that will execute my wife and, shortly thereafter, will execute me.

“Three...” The man says and I can see my wife clench her teeth, her jaw alternately flexing and quivering.

There was a time when a man who stood for his own equality was called heroic. The men who built this nation, tired of the oppression of their native England, revolted and spilled their blood for the freedom I still believe in. Unfortunately, freedom is dying. As the calendar pages fall so do the bodies of those who choose freedom. It seems as though we have lost.

My wife, I cannot remember her name, is beginning to sob and the burst of tears running down her face makes my jaw sting with thirst.

They have given us our chances. We were offered immunity and acceptance in exchange for submission. We have been given our opportunity.

We, the rest of us, watch with a sideways glance and I hear another person gulp loudly as they swallow the same lump of saliva that filled my mouth at the sight of water.

The droning voice over the loud speaker, we’ve heard it for as long as we can remember. It repeats in a sickening roll: Eht euqinu eid gnuoy.

The man pulls the hammer back and the explosion makes me squint and jump. From inside the room it was never that loud. I watch my wife’s head snap back, then another crack and another bullet slams into her making her drop her arms. A final shot at the top of her head kicks a curl of her blond hair to the ground and the rest of her follows. Her eyes catch mine just before they steel into nothing.

Another man in Khakis--they all wear khakis--enters. He is carrying a gun over one shoulder. He grabs my wife’s body by the ankles and drags it out of the orange clay dust and into another room or outside to be thrown atop the others we have heard. Her blood soaks into the earth.

He counts down, allowing me to rethink the offer a final time. Subjugation in exchange for my life. This man does not know why he is doing this, only that he must or he too will face this decision. My America is lost and I exhale slowly as I feel the bullets, never hearing anything again.

With the last of my strength, my stomach against the ground, I scrawl with my dying finger: A gun cannot compel real desire only contempt for its bearer.

The man with the gun slung over his shoulder walks toward me, my vision blurring, lightening and darkening and he stamps his designer shoes through my message. His eyes are empty and sad and nothing more.