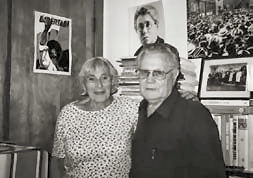 Over her lifetime, Audrey engaged with generations of anarchists, and in many ways served as a bridge between them. The fact that as a teenager in the late 1930s, Audrey hitch-hiked to Toronto to meet Emma Goldman, gave younger anarchists who met her a direct connection with anarchist history.

Audrey was inspirational because she lived her principles and was involved with a myriad of fellow anarchists and activities. She never married, but lived many years with her partner David Koven, and had two children with him.

She never voted, but was well aware of current affairs and political issues.

Audrey was a “black diaper baby,” born in New York City to a bookbinder and a dressmaker from Poland. Her parents were both anarchists and secular Jews. Her first language was Yiddish and she didn’t learn English until she went to public school.

When she was six, her family moved to the Sholem Aleichem House, a cooperative housing project in the Bronx mainly populated by anarchists, social democrats, left Zionists, and communists. Throughout her youth she was surrounded by poor, but highly political and cultured people who not only made political discussions a constant part of their lives, but also engaged in direct action activities.

When parents felt a traffic light was needed in their neighborhood, they protested by standing in the street until the city agreed to install one. After her co-op was taken over by a private firm, the residents launched a strike that succeeded in lowering their rents. In addition to the local activities that shaped Goodfriend’s politics, her early memories included the execution of Sacco and Vanzetti in 1927 and the 1936 revolution in Spain.

Just before World War II, she attended Hunter College and joined the Young Anarchists. During the war she became part of the New York-based anarchist group Why?, which agitated against the conflict from an anarchist perspective. The war was controversial in anarchist circles, with many feeling it necessary to support it in an attempt to stop the spread of fascism, but Why? continuously published tracts condemning it.

After the war, Audrey and Koven continued to agitate against the military draft and traveled the U.S. raising money for their group’s efforts. When passing through San Francisco, they decided to move to the Bay Area having previously corresponded with anarchist writers Paul Goodman and Kenneth Rexroth. They were impressed with the cluster of people around the two authors who later were instrumental in forming the Beat movement. Though Audrey wasn’t part of the Beats, she was present in Berkeley in 1955 when Alan Ginsberg read his influential poem, Howl in public for the first time.

In San Francisco around 1950, she and David helped form a cooperative and intended to eventually build a commune in the countryside. Each member contributed whatever they earned to a community pool (it was mainly the women who held jobs). They organized weekly open discussions on anarchism and other topics such as politics, literature, and psychology at the San Francisco Workmen’s Circle Center.

When Audrey and David had kids in the 1950s, she became acutely interested in how schooling effects a person’s socialization and politics. She attended San Francisco State College to obtain a teaching credential. Then, along with a few other couples they had met through political circles, they created the Walden School in Berkeley.

It was designed on the principles of the anarchist Modern School in Stelton, New Jersey. When she was younger, one of Audrey’s teachers had previously taught at the Modern School, and in her late teens, Audrey visited there. Audrey maintained her interest in Stelton throughout her life.

I remember her peppering me with questions after Paul Avrich took Federico Arcos and me to a reunion of school attendees a decade ago. One of the principles of the Walden School was to listen to the students and the teachers more than to the parents. Audrey taught at Walden from 1958–1971.

I met Audrey at the First International Symposium on Anarchism and Film in Portland, Oregon in 1980. When we returned to Berkeley afterwards, we both became involved in monthly meetings of young anarchists in San Francisco’s Mission district, and fundraising picnics hosted by elderly Italian anarchists (remains of a once-vibrant anarchist community of chicken farmers north of San Francisco).

For over 30 years I have watched Audrey interact with anarchists less than half her age as an active member of study groups and attending public events. In 2000, we both attended a gathering in Venice, Italy on the historic links between anarchism and Judaism. Audrey had a wonderful time, dancing (with a bum hip and a cane for support), carousing and telling jokes with anarchists from all over the world. She never used her age or experience to push her own views as superior. On the contrary, she was humble, and would listen attentively even to very naïve observations from others. She enjoyed engaging with other people, and hearing what they had to say.

When she was 60, she developed a passion for acting, and for 25 years performed in a Berkeley theater troupe. One night in January of this year, she went to a performance, came home talking excitedly about what she had seen, went to sleep, and never woke up. We know that she hadn’t anticipated dying, as she had just purchased a year’s worth of theater tickets!

Those who interacted with Audrey will never forget her vibrancy. She was a worthy role model for many of us. And for most of us, she was a vital link with the generations of anarchists who have come before us. Her spirit will always be a part of us.

Howard Besser is a bicoastal educator who has been involved in anarchist politics since the 1960s. He maintains a collection of 2,500 t-shirts of social significance, and last saw Audrey at his T-Shirt Exhibition in Berkeley, Calif. in July 2012.