Tune, Occasion, and Memory of Mnísota
Identity & Remembrances of the 2008 RNC Protests

I don’t dwell often on the 2008 Republican National Convention (RNC) protests, yet an acquaintance jarred my memory. En route to summer solstice ritual, she tells me she moved from Minneapolis.

“My only impression of Minneapolis was the RNC,” I sigh.

“I was on the welcoming committee,” she recalls with a knowing rearview mirror glance.

I thought I was embarking on a new experience, another life phase as a mystic anarchist artist who doesn’t know where she fits in radical organizing anymore, yet, here it is, an affinity, a bond reforged.

In 2008, I was anarcho-identified in political tactics but was uncomfortable as an anarchist. A firm secular humanist invested in state solutions, I believed people could will society into balance without the aid of plants or animals. I slipped into the void, found organizing meaningless, and acted from a freeing, reckless source of nihilism.

Near rock bottom, suicidal and bleak, I read Lame Deer Seeker of Visions by Thahca Huste (John Fire Lame Deer), who was Mineconju-Lakota Sioux. Reading his exhausted, mournful, yet humorous tone and the haunting beauty of how much John Fire Lame Deer lost, I became an anarchist.

Prior to the day of blockades, Starhawk helped lead a workshop on nonviolent resistance. Practicing tactics, we were instructed to visualize our feet as bases of trees, to feel our roots beneath concrete, to remember this power and support, to sense the forest energy around, to act in solidarity with all incarcerated and globally oppressed people. How could I, an anarcho-leftist and secular humanist, feel forest rhythms when my self-loathing and seething disdain for life were too loud?

Our Students for a Democratic Society bag-of-tricks blockade was ineffective. We met up with the Pagan Cluster, which included Starhawk and a circle of activists in their forties through sixties preparing ritual. Clad with staffs and cloaks, they held radical ritual and song. I couldn’t embrace the chants, intentions, or get-ups. I was flabbergasted. How is this in solidarity with oppressed people everywhere?

Asked to string yarn between light posts and signs across an intersection, we weaved a web of colors. Police atop horses moved in to knock down the yarn, yet horses got spooked, bucked, and stepped on activists’ feet. Frustrated police climbed down to cut yarn with scissors. The crowd laughed. Energy in the air was electric, chilling. The police eventually dismantled the web, while direct action coalesced elsewhere. How could this meek display of string be more effective than all the derailed tactics I and my generation, in our early to late twenties, tried?

The Pagan Cluster led a spiral dance with protesters linking hands. We amorphously maneuvered about horses and rigid police lines, so we could get over to crowds of delegates. Instantly, activists broke calm demeanor to berate and jeer warmongers.

When the police approached, activists switched tone. We danced with gentle movement around horses, a steady grounded footing in the street. I am haunted by the memory of a teenage woman with outstretched arms, police atop horses looming over her face. She stood unflinchingly. She was stepping into her power, some rite of passage, encouraged by elder activists with a comforting touch or gesture. We soon dispersed when teargassed.

Fleetingly, we witnessed transformation. Ritual art momentarily unleashed the power that movement organizing builds. I respected the skill of veteran activists, yet the ritual’s impact was lost on me.

Over years of burnout, I turned my back on direct action. I had the fortune to read Lame Deer Seeker of Visions (1972). With some hope for the contemporary American Indian Movement, the book mostly is an elegy over the loss of Sioux culture and his pain as a wicasha wakan, a Lakota holy man.

I finally saw colonization around me in its pervasive saturation and my role in occupation. The spirit of anarchy made home in my core, despite the fact that Thahca Huste never mentions the word anarchism. 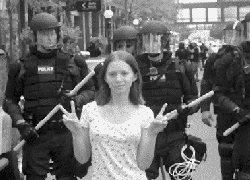 From this place of opposition, by defining what I was against and holding space for possibilities to arise, a worldview emerged, tenets of magic, nature, and serendipity. Through these, I’ve realized myself as transgender, Slavic-American, and pagan.

During the 2013 Philadelphia Trans-Health Conference, I listened to Qwo-Li Driskill, who is Cherokee Two-Spirit/Queer, address the need to decolonize transgender organizing. On Lenapehawking soil, s/he emphasized how incorporating two-spirit under the umbrella of transgender is recolonization, a subjugation of Native being under Euro-U.S. worldview.

The room was tense as s/he emphasized how all non-Native people occupy the Americas, including non-Native people of color. Qwo-Li Driskill urged allies to center Indigenous people in our work and leadership, to move beyond solidarity, since privileged ally work receives more props than Native led organizing.

I must grapple with what the settler status entails, to counter with constant alliance in communities led by and in coalition with Indigenous people. What does such coalition look like? Off reserves and reservations, what does organizing look like that centers Native ancestry, community, and people in work, leadership, and envisioning? We must act and dream past the end of the nation-state’s temporary occupation, an uncertain path for all.

Of seeds sown in ritual,

Oh, Minneapolis, hybrid of Dakota mni and Greek polis, how dare you pose as equilibrium between worlds!

What gardens have we pruned and stewarded since 2008, now with opportunity to tend together? Conviviality is only the beginning. Anarchist paganism on occupied soil is still an imposed regime.

brothers sisters prior dreamed my being

I, the silly slav, dream only,

Lead me to occasion

blessed are our holy hopes,