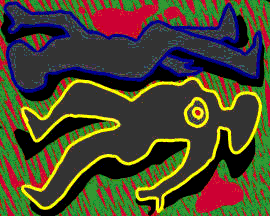 As the disturbing trend of mass shootings has steadily become a staple of American society, they serve as one extreme example of the collapsing modern social order.

Factors related to the rampages are isolation, hierarchy, the nature of school (where spree shootings often occur), militarization, and language.

In these incidents which are increasing in frequency, an aggregate is attacked, as shooters fire at the most accessible throngs of people, going after anyone in close proximity.

The rampages typically begin with a lone, young male entering a populated area and opening fire in an attempt to kill numerous others, then killing himself, making it seem that shootings of this nature are a devastating last stop on the route to suicide.

In schools, frequent sites of spree killings, a hierarchical culture of dominant winners and predatory types get glorified, while those designated as losers get punished or ostracized. Timid and taciturn individuals are often humiliated and intimidated. Schools come to be seen by potential shooters as suitable targets to inflict violence and to impose fear and humiliation in retaliation for what they have been subjected to.

The mentalities of spree shooters develop within schools, malls, and cyberspaces of individualistic, hierarchical, consumer society. Most shooters demonstrate exaggerated versions of traits that are common to many Western males, such as coldness, self-righteousness, loneliness, and anomie. Moreover, many come from middle or upper-middle class backgrounds, but experience lower status existence in social or school contexts, seeing their acts as revenge against higher status peers.

Cultural theorist Paul Virilio explains that a militarization of consciousness pervades global civilization and that people are civilian soldiers living in a logistics-based social order dominated by techno-logic.

Aside from the pervasive warlike atmosphere in which we all exist, many of those who commit spree shootings, it is frequently noticed, have a ramped up fascination with weapons, war, and first person shooter video games.

The use of language also seems important in relation to the rampage phenomena since many young shooters tend to be shy and unwilling or unable to manifest the more culturally valued male style of effusive verbal-linguistic self-assurance (i.e., being loud and confident). It appears that many who commit these types of attacks have grown intensely weary of their experience of continual disconnection, whether from not relating to those around them, or simply from isolation.

This disconnect is associated with dominant communication patterns, as the established language blueprints of the mainstream schema maintain and reproduce the coldness and hierarchy ubiquitous in the prevailing order.

The lower status rampage shooter tends to differ in some ways from the high-ranking, vociferous male in how he imposes pain and patriarchy. Instead of using a combination of words and behaviors to steadily dominate and stifle others, the reticent spree shooter inflicts his will all at once in a dramatic, impersonal, and deadly exploit.

Primitivist theorist John Zerzan and Beat writer William Burroughs both offer theories on the modern spirit of words that may be relevant to the verbal withdrawal common among spree shooters. Zerzan sees symbols as having replaced most of reality, believing that we now live within a system of dominant and manipulative symbols to a greater degree than we do within our bodies or with each other.

The mainstream language system that Zerzan refers to is displeasing for all who are caught in it. It is true, though, that low ranking individuals seem to suffer the biggest consequence, since partaking in the dominant linguistic patterns means perpetuation of an inferior position in the chain of command.

Burroughs writes that words are a virus existing for the sole purpose of replication, believing that language starts from outside the human host and typically comes to inhabit the developing subject in the manner of an infestation or infection. In many of his books, he uses words to break customary linguistic patterns, showing that language can also be used for liberatory objectives, though he cautions that more often than not words have been used to dominate and manage.

In healthy, non-dominating communication, instinct is esteemed, wholeness is supported, and allowances are made for numerous styles and degrees of expressiveness.

While mass shootings are not quantitatively vast in terms of loss of life in comparison to other widespread phenomena such as war or cancer, they express an immense amount of significance in directing attention towards major social concerns.

As capitalism, information technology, and the security apparatuses continue to develop, social alienation, apathy, and anomie proliferate, and the incidences of mass shootings will undoubtedly increase. Implementing a different social composition, dismantling the noxious and enveloping cybernetic-militarized surroundings, breaking away from the prevailing speech patterns, and creating autonomous spaces without the elements of hierarchical and patriarchal domination, are necessary in order to change the circumstances that generate rampage shootings and cause a myriad of other sufferings.

It seems clear that in a social situation which promotes a multitude of divergent, self-directed arrangements, spree shootings would be very unlikely to occur.

Bryan Tucker toils in the healing sector, and likes to study and write about the intersections of culture, psyche, and health.