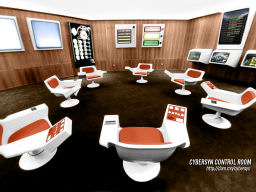 Eden Medina’s Cybernetic Revolutionaries provides an account which is sympathetic to Chile’s Project Cybersyn. She uncovers and details the largely forgotten and extraordinarily fascinating history of how information and communication technology was seized upon as a way to realize President Salvador Allende’s socialist aspirations.

After his election in 1970, Allende led Chile on what he described as the “Chilean road to socialism” which was to differ from the revolutionary path charted by figures such as Fidel Castro in Cuba. In contrast to the Cuban example, the democratically elected Allende aimed to use already existing institutional channels to peacefully introduce socialist policies to his country. His plan was offered as a third way that did not explicitly align Chile with either of the two superpowers that were waging their Cold War and using smaller countries as pawns.

Similarly, Chile’s road to technological prowess was to differ from what conventional wisdom suggested. The generally accepted path forward for small lesser-developed states was to make big friends and then import modern technology and expertise from them. Instead, Allende took an interest in the emerging field of cybernetics as a way to more creatively think about how to use the computer technology they already possessed—which was far from the most advanced—to create systems that even the superpowers could not yet accomplish. They set out to build something akin to a nationwide internet before the existence of the internet.

With the help of eccentric British cybernetician, Stafford Beer, Chile launched Project Cybersyn to create an information network that would make a state controlled economy both feasible and efficient.

Those involved in Project Cybersyn sought a way to capture and manage the flood of information needed to be processed in real-time so that state officials could make informed decisions about how to most efficiently run the economy.

The current obsession with real time information was effectively being pursued in 1970s Chile. State officials would know if productions goals were being met, if raw materials were being delivered, if a work stoppage was interrupting their plans, and vast amounts of other such quantifiable data pertaining to the economy. They wanted models predicting how the economy would respond in the future based on current data.

With such information delivered in real time, the state could theoretically be able to shift and adapt so their desired end targets were achieved. Production quotas could be altered, raw materials could be rerouted, difficult workers could be circumvented, and so on. According to cybernetic theory, the state needed to be as homeostatic and as responsive as a living organism.

The political aspect of the project was highlighted in Allende’s intention to solve the dilemma between maintaining a stable state and allowing for personal autonomy. Individuals needed to have the freedom to live as they chose while at the same time not jeopardizing the stability of the state. Beer and his Chilean colleagues believed that cybernetics could ease this tension by creating a more dynamic state that could allow both. Medina’s book, however, fails to point out that this, in reality, is a sleight-of-hand trick which allows the individual to do as they wish provided the state can easily neutralize their efforts. One can do anything provided it is without consequence.

Since the Allende government defined its policies as socialism, it was also important to at least pay lip service to the notion of worker participation. The operations room of Project Cybersyn in Santiago was supposed to be accessible to even the uneducated rank-and-file. It included screens but only a few buttons. It included chairs but no tables and no paper.

Information was to be displayed graphically so it could be readily understood and acted upon. Keyboards were out because their presence would have implied secretarial work (and bureaucracy) which in turn implied the presence of women in the operations room which is not how the rank-and-file were generally pictured. Indeed, a gentlemen’s club was proposed as one aesthetic model for the design of the operations room. In hindsight, the completed command center has drawn comparisons with the War Room in Stanley Kubrick’s film Dr. Strangelove.

Yet as novel as Allende’s political supporters thought his road to socialism was and as innovative as the cyberneticians considered their system, the message of Medina’s book, when read from an antiauthoritarian or anarchist perspective, is that these are but nuances on the organization, development and administration of the industrial system on which a new label was tacked.

Although Allende may have dreamed of a different road or path, his cybernetic industrialism had more in common with Fordism and Taylorism than it did with humanity’s emancipation.

The 1973 U.S.-backed coup that ousted Allende from power and installed the Pinochet dictatorship prevented Project Cybersyn from ever being completed. This fact allows supporters of the project to keep their dreams intact as to what might have been if it had been free from interference. Even Medina seems to occasionally resist criticism in this fashion. But to advance this line of thought, to defend the project in this way, requires that at least some sympathy for its goals of a highly coordinated industrialism. It may have been wildly successful if it had proceeded unimpeded, but in a process which was fundamentally flawed.

Allende, like Marx, thought that socialism could modernize and ultimately be more productive than capitalism. But if that is not the desired destination, it is of little consequence which ideology will purportedly get there faster.

Capitalism and socialism are essentially two different strategies both seeking to make mass society possible. There is nothing radical about simply picking one side over the other; rejecting capitalism only to embrace socialism. The project of mass society needs to be rejected outright.

Ian Erik Smith lives in Eugene, Oregon. His academic background is in philosophy and his writing has appeared in Philosophy Now, the Journal for Critical Animal Studies, and the recently released volume, Animals and War: Confronting the Military-Animal Industrial Complex. He blogs at uncivilizedanimals.wordpress.com.