Nobody Spat on American GIs!
The Mythical Imagery of the American “Great Betrayal” Narrative

Stories of spat-on veterans began proliferating in the U.S. media in 1990 as the country ramped up for the first Persian Gulf War. Anti-war activists had spat on troops returning from Vietnam, or so the stories went, and to make sure that did not happen again, Americans were urged to rally around the men and women dispatched to the Gulf. Within weeks, the nation was awash with yellow ribbons, symbols of support for troops, and by inference, the mission on which they had been sent. 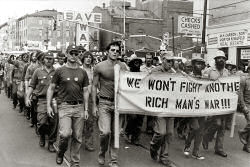 Rather than being spit on, returning GIs and veterans led anti-war demonstrations, as in this photo from 1970.

The classic spitting story is told by a Vietnam veteran who deplaned at San Francisco’s airport and was met by spitting women and hippies or “male longhairs,” some carrying placards reading, “Baby Killer.”

Several of the story tellers say they were warned by military authorities on the plane to go immediately to the airport restroom and change into civilian clothes lest they be attacked by protesters. One caller to a radio show interview with me said that he observed the trash can in the restroom piled high with uniforms. When he was asked if their were any photographs of the piled-uniforms, he was gone.

The Gulf War context may have catalyzed, “I was spat on, too,” stories that had never been told before--a kind of copycat phenomenon. But the accounts only proliferated after that.

With research help from Holy Cross College student Lynn Barowsky in 2008, I began collecting the first-person spitting stories and entering their details into a spreadsheet. To my surprise, the frequency of stories-told had not diminished since they first trended in the early 1990s. I have now recorded over 200 stories from returning vets, all of whom relate some variant of the spitting image.

My 1998 book, The Spitting Image: Myth, Memory, and the Legacy of Vietnam, delved into the origins of the stories and inquired into their persistence. I was careful not to call the stories lies, and even allowed that some version of their classic form may have actually occurred--after all, you cannot prove a negative. However, there is no evidence that such incidences actually happened, and a scant record of claims in the media or anywhere else made during the late 1960s and early 1970s when the corporate media would have made every effort to cast aspersions on anti-war activists.

Some particulars in the stories could not be true, such as returnees from Vietnam landing at civilian airports like San Francisco. Rather, those planes arrived at military facilities such as Travis Air Force Base, 50 miles north of the city where protesters could not have gotten near deplaning troops.

Also, it was very unlikely that returning soldiers would have been told to take off their uniforms. Discarding their uniforms would have meant abandoning military property, a serious offense that returning soldiers looking forward to getting home and out of the service would have been hesitant to commit. Plus, it is implausible that young women would spit on anyone as a form of political expression, let alone a battle-hardened male soldier.

Stories of protester hostility toward veterans were incongruent with the historical record that activists had reached out and recruited veterans to the cause of ending the war, and that thousands of service personnel returning from Southeast Asia joined the anti-war movement.

The image of spat-on veterans was displacing memory of veterans politicized and empowered by their wartime experience. The consequence of that displacement would be evinced years later when a new generation, oblivious to the political narrative of antiwar veterans, sought identity within victim-veteran imagery provided by the mental health discourse of PTSD.

I was most fascinated by the fact that similar stories were told after other lost wars including Germany following World War I and France after its loss of Indochina in 1954. In both cases, it was women who were alleged to have greeted returned veterans hostilely. The German women, some with pistols tucked in their skirts, were said to have spat on the soldiers.

The German scholar Klaus Theveleit, in his two-volume Male Fantasies, examined the stories and judged them to be what his title exclaimed--male fantasies. Theveleit used a Freudian analysis to explain that the stories were expressions of male fears of women with male powers--even the power to project body fluids.

In turn, the scapegoating of women masked veterans’ fears of their own female inner-Other laying hidden in the subconscious until brought to the surface by battlefront defeat casting doubt on their masculinity.

Theveleit’s psychoanalytic study centered on veterans who were key members of the Freikorp, formed to suppress the revolutionary upsurge in Germany following World War I. Many of his subjects became prominent Nazis a decade later.

One might think that with the passage of time and the efforts like my own to debunk the spitting stories as myth, their telling would be a past-tense phenomenon--the kind of stories “once told” that are now known to be folklore. But one would be wrong.

The October/November 2014 issue of AARP Magazine ran a story written by Gary Sinise, the actor who played Lieutenant Dan in the movie, “Forest Gump,” who related a story his brother-in-law, Jack, told upon returning from Vietnam. Jack ducked into the airport’s men’s room to shed his uniform because, “he’d heard the stories about returning soldiers being spit on.” It was what happened “at home” during the war, wrote Sinise, that inspired his commitment to see that it didn’t happen again and that the troops sent to “protect our liberties” will be appreciated and cared for.

I continue to receive stories sent to me as evidence that Vietnam veterans had been spat on. The most recent was received on January 22, 2015 from a veteran who returned through San Francisco in 1970:

“I was followed by five or six hippies who immediately started cussing at me, calling me all kinds of names and spit at me. They didn’t hit me since they were bad shots. I realized that to hit them would create a disturbance, involve the police, and the odds were against me. So, I continued on and got onto my plane. To this day, I don’t even like to go back to that area of the country.”

This fellow was quite angry with me for describing stories like his as myths. In a set of email exchanges between us, he said I was calling men like him “liars” and expressed doubt that I “had ever served my country” and speculated that I had an “anti-military agenda.”

Stories of spat-on Vietnam veterans have become so ingrained in the American discourse about war and veterans that they can now be referenced matter-of-factly with no acknowledgment of their mythical properties. Their migration from bar-stools to the higher cultural ground of literary trope has been assisted by mainstream news organizations, which, with few exceptions, repeat the spit-on stories uncritically.

As recently as February 22 of this year, The New York Times Sunday Review repeated the canard--”...with Vietnam, people spit on you...”--as if it’s just something that everyone knows to be true.

As one of the Vietnam War’s more enduring legacies, the stories of denigrated veterans are now salted into the biographies of the latest generation. The late Navy SEAL Chris Kyle, wrote in his book American Sniper, of being disparaged in San Diego upon his deployment to Iraq. He recalled passing “a small group of protesters demonstrating against the war. They had signs about baby killers and whatever, protesting the troops going over to fight.”

The new stories also continue a pattern in which claims of mistreatment by anti-war activists are often bundled in resumes displaying remarkable martial accomplishment. In his blog, culture critic Michael McCaffrey, challenged the veracity of several boasts made by Kyle and gave particular attention to the “baby killer” incident. It was, said McCaffrey, “at worst, pure fantasy; at best, a great embellishment.”

The American betrayal narrative was provided Presidential imprimatur when Barak Obama used his 2012 Memorial Day speech to announce a $65 million Pentagon plan to commemorate the war in Vietnam with a 12-year series of events running across the 50th anniversary dates of the war. Speaking to cameras with the Veterans Memorial Wall as the backdrop, the President called the Vietnam War, “one of the nation’s most painful chapters.” Treatment of Vietnam veterans he said, “...was a national shame, a disgrace that should have never happened....We’re here today to see that it doesn’t happen again.”

News pundits were quick to associate the President’s remarks with the enduring images of the Vietnam era spat-upon veteran. The Los Angeles Times editorialized in 2012 that “it was a mythical image--an edifying myth,” the writer said, but still a myth. An edifying myth--and a dangerous myth. The disparaged Vietnam veterans invoked by President Obama are mythical, and it is dangerous imagery. Myths are group stories, stories as real as the people who tell them--as real as the group, the nation, that the stories create.

Nations bonded by commitments to avenge their hurts are dangers to all. Germany’s dolchstosslegende led it into a terrifying campaign for retribution that, in the end, destroyed Germany itself. France’s generals in the 1950s, feeling abandoned in Indochina by civilian leaders, sought reaffirmation in Algeria and inflamed the conflicts there with consequences that Paris has still not outlived.

The United States having gone to the Persian Gulf in 1990 to “kick” its Vietnam Syndrome, as President George H. W. Bush said at the time, instead supercharged the jihadi movement into the World Trade center and found itself, years later, bogged down in a multi-front war with no end, much less victory, in sight.

Remembered by many as a war lost because of betrayal at home, Vietnam has become a modern-day Alamo that must be avenged, a pretext for more war and generations of more veterans.

However, it more correctly should be remembered as a war in which soldiers, veterans and citizens joined hands to fight for peace demonstrating the effectiveness of popular resistance to political authority.

Obama’s endorsement of the Pentagon’s plan to remember Vietnam during the next 12 years as a war lost to betrayal on the home front only beclouds what needs to be remembered lest we are taken down the path to more wars like it.

We need to reject the political, economic, and militarist logic that leads to endless wars, and to remember the inspiring history of returning veterans who, along with the anti-war movement and GI resistance, brought the troops home from Vietnam.

Jerry Lembcke is the author of The Spitting Image; Hanoi Jane: War, Sex, and Fantasies of Betrayal and PTSD: Diagnosis and Identity for Post-empire America. In 1969, he was a Chaplain’s Assistant assigned to the 41st Artillery Group in Vietnam. He is Associate Professor emeritus at Holy Cross College in Worcester, Mass. He can be reached at jlembcke@holycross.edu.