A New Right for Women
Eligible for the U.S. War Machine

No Draft, No Registration, No War

No Draft, No Registration, No War

Young women may soon face the same choice at age 18 that men have faced since 1980: whether to register with the Selective Service System for possible military conscription. 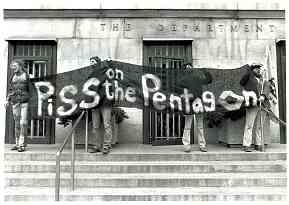 Edward Hasbrouck, who wrote this article with others, along the march route of the Mobilization Against the Draft (estimated at 30,000 people), Washington, DC, March 22, 1980. (photo by Craig Glassner)

Now that the military allows women in all combat roles, military policy can no longer be used as an excuse for requiring men but not women to register for the draft. If Congress does nothing, courts are likely to rule that the current men-only draft registration scheme is unconstitutional. As a result, Congress will soon have to choose whether to extend draft registration to women, end it entirely, or reverse the policy change opening combat assignments to women.

Reformers among many oppressed groups, most recently women and LGBT people, often advocate military service to the state as a way to obtain equality. However, radicals among these groups seek freedom from the state and do not want to fight for it nor for its interests.

One radical queer collective encapsulated the argument in the title of a recent anthology: Against Equality: Don’t Ask Us to Fight Their Wars.

In response, the government amended the Constitution in 1971 to lower the voting age to 18. But voting rights did nothing to stop the draft or the war. The government continued drafting teenagers, knowing they were outnumbered and outvoted by people too old to be at risk of being drafted.

During World War II, the U.S. tried to draft Japanese-American men while they and their families were interned in concentration camps. Mainstream Japanese-American organizations encouraged internees to enlist as a way to prove their loyalty to the U.S.

But there was widespread resistance within the camps, leading to the largest mass trials of draft resisters in U.S. history. In the years since, Japanese-American draft resisters who once were ostracized, have come to be recognized as community heroes.

Is registering to fight for the empire the path to women’s liberation? There’s been a longstanding split between liberal advocates for gender equality through war making, and radical feminists who have opposed war and the draft as sexist.

When President Jimmy Carter announced his proposal to reinstate draft registration in 1980, some of the strongest opposition came from women.

Carter’s rationale for bringing back draft registration was to prepare for U.S. intervention in Afghanistan in support of the mujahedeen fighters who were U.S. surrogates battling Soviet troops.

I spent 4-1/2 months in a federal prison camp in 1983–1984 for refusing to agree to fight on the side of what became the Taliban and Al Qaeda.

The government tried to scare young men into registering by prosecuting a handful of vocal nonregistrants in the early 1980s. Because the government had to prove that each defendant knew he was supposed to register, only those who spoke out publicly could be prosecuted.

An open letter I wrote to the government, and published in a 1982 Fifth Estate, was an essential part of the evidence against me in court. These show trials backfired. They called attention to the resistance and made clear that there was safety in numbers and in staying closeted.

Enforcement of draft registration was suspended in 1988, and never resumed.

Young men today have to register if they want to qualify for student aid and other government programs, but there’s no attempt to verify the addresses they provide. Men are supposed to notify the Selective Slavery System every time they change their residence until their 26th birthday, but almost nobody does. The only audit of Selective Service, in 1982, found that 20 to 40 percent of the addresses on file already were outdated. Today, most induction notices would end up in the dead-letter office.

Will young women be more willing to register for the draft than young men have been? Women have the same reasons as men to oppose draft registration, and will undoubtedly have reasons of their own. A petition against registration of women or men, started earlier this year by a draft-age woman, Julie Mastrine, got more than 10,000 signatures in its first week.

Some people think that none of this matters because, “It’s only registration.” But the raison d’etre of draft registration—in addition to inculcating the idea that we each owe the government a debt of service—is to enable a draft.

And, the reason we only have registration, and not a draft, is that registration has failed to overcome massive noncompliance, sustained spontaneously over decades, that has rendered registration unenforceable and the registration database useless.

The success of draft resistance in preventing a draft is one of the most important popular victories of the dark days of the Reagan era and after. But because the resistance has been largely passive and closeted, its success and its implications for military policy (the draft is not a realistic policy option, regardless of whether the President, the Pentagon, and/or Congress want it if they run out of enlistees, mercenaries, contractors, etc. to fight their wars) have been little noticed.

As James C. Scott observes in Domination and the Arts of Resistance, “Quiet, anonymous... lawbreaking and disobedience may well be the historically preferred mode of political action for...subaltern classes, for whom open defiance is too dangerous.”

Governments don’t do well at acknowledging that their power is limited by the willingness of the people to carry out their orders. It seems likely that another wave of resistance, or at least visible evidence of the inevitability of resistance to any attempt to expand draft registration to women, will be necessary before the government will admit that draft registration has failed, and end it entirely.

The decision of whether there will be a draft, or whether military conscription will be removed from the U.S. arsenal, is being and will be made by the people who are ordered to register for the draft or submit to induction, not by politicians.

Anti-draft strategy should focus on encouraging, empowering, and supporting resistance by young women, young men, and their allies that will make a draft impossible or unworkable, not on trying to persuade politicians.

Edward Hasbrouck is an anarchist, pacifist, and ally of youth liberation. He maintains a website about the draft, draft registration, and draft resistance at Resisters.info. His site is Hasbrouck.org