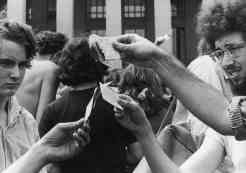 Bruce Dancis’ book Resister: A Story of Protest and Prison (Cornell Press, 2014) chronicles his efforts during the Vietnam War to defy the draft and cripple the U.S. war effort.

Fifth Estate: You tore up your draft card and then led a mass burning of them in 1967.

Bruce Dancis: Very few people wanted to fight in the Vietnam War, even those who supported it. There were 27 million draft age men and 25 million didn’t go into the army.

I decided my student deferment was unfair. Poor kids couldn’t get them and were subject to induction into the army. We needed resistance to the war, so I tore up my draft card.

They were paper back then. In 1965, Congress passed a Law making it illegal, punishable by five years in prison, to mutilate or destroy your draft card.

The draft card became the symbol of oppression for young men and the women who supported them in the mid-and late-1960s.

FE: Why did you wind up going to prison?

BD: I was prosecuted for tearing up my draft card. I was one of the first people to do that and was singled out. And, I was organizing other men to burn their cards. I was convicted and served 19 and a half months in federal prison.

FE: Very few people of those who violated the draft law were prosecuted.

BD: That was a smart strategy by the government. Our goal was to keep having more and more men tearing up and burning their draft cards, turning them in, refusing induction. We hoped we would flood the courts, fill the jails, make it hard to get enough men to fight the war.

The prosecution was smart. They picked off ringleaders like me. The U.S. Attorney General at the time, Ramsey Clark, said the government would have been crazy to go after everybody. Ninety percent of those who committed some punishable act under the federal draft statute were never prosecuted.

BD: We had about 185 men who burned their draft cards at the time of the Spring Mobilization, a large demonstration against the war. This is where Dr. Martin Luther King spoke, one of his first major addresses against the war.

FE: How did you fare in prison? Draft card burners were reviled in the media.

BD: Most of the guys in prison were there for crimes like inter-state car theft and were incredulous that I was there for tearing up a piece of paper.