How the American Left Abets Genocide in Syria

Today, many American leftists are accepting and even promoting the propaganda of the dictatorial regime of Syrian President Bashar Assad. They overwhelmingly stand on the side of fascism and genocide in that ravaged country. 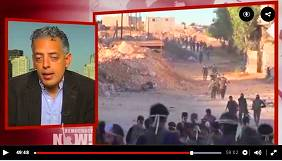 Democracy Now! features guests who constantly declare that the Assad regime is the only hope for stability in Syria. It took an online petition to get program host, Amy Goodman, to invite a Syrian activist to appear on the show. Pictured is Yasser Munif of Global Campaign of Solidarity with the Syrian Revolution.

In areas the Syrian regime controls, it is carrying out a systematic extermination of those suspected of dissent—beginning with prisoners. Poison gas has been used repeatedly. Starvation has become a weapon of the war, with the regime denying food aid to besieged areas.

Most leftists claim they are just against U.S. intervention. But the facts demonstrate otherwise.

The ANSWER Coalition, a remaining pillar of the diminished anti-war movement—whose ironic acronym stands for Act Now to Stop War and End Racism—supports Assad openly. Their rallies feature placards with the dictator’s portrait and the flag of his regime (which replaced the Syrian national flag when his father seized power in 1971). ANSWER began as a front group for the authoritarian Workers World Party which openly supported North Korean dictator Kim Jong-il and Serbia’s Slobodan Milosevic, so their support for Assad is not surprising.

But less openly pro-Assad elements still mouth the regime propaganda line that all the opposition in Syria consists of CIA-backed jihadists. This ignores the reality of the Syrian conflict, which began in 2011 as a spontaneous popular revolution—part of the general upsurge throughout the Arab world. It only escalated to civil war after the regime’s security forces serially massacred unarmed protesters. The civil resistance movement that began the revolution—secular, pro-democratic, and independent—continues to exist, even as it has been pushed from the world headlines by utterly ruthless armed actors.

Some anarchists in the U.S. have mobilized in support of the Syrian Kurds, who have declared a left-libertarian autonomous zone in their region known as Rojava. (See Fifth Estate #393, Spring 2015 and #394, Summer 2015.) While this solidarity effort is to be encouraged, most stateside anarchists have shown little awareness of the civil resistance movement among the Arab majority of Syria, which also has currents influenced by left-libertarian thinking. (See FE #396, Summer 2016.)

The petition noted that on April 25, Democracy Now! devoted nearly a full program to a Goodman interview with Seymour Hersh, who can now only be considered an open propagandist for the Assad regime. In the interview, he applauded Russia’s intervention in Syria as “effective.” The petition noted that Russia had killed 2000 Syrian civilians, and bombed multiple hospitals.

Hersh has said far worse in his many other appearances on “Democracy Now!” In a 2013 broadcast, he declared that Assad is “the only game in town, whether you like it or don’t like it.” According to Hersh, the secular opposition has been “overrun by jihadists.” So, in his view, the Assad regime is the only hope for stability in Syria.

Not only do such heroes of the contemporary left as Hersh offer no solidarity to the secular resistance in Syria—they deny that it even exists. And they hail the mass-murdering dictator as guarantor of “stability.”

By the time al-Shami and Yassin-Kassab were finally contacted by Goodman, they had completed their North American book tour and left for Europe. Giving credit where it is due, Goodman did, partially, make amends.

On May 13, she featured a segment with this very refreshing title: “Amid Ongoing Conflict in Syria, Activists Work to Keep Alive Revolutionary Spirit of 2011 Uprising.” Interviewed was Yasser Munif of the Global Campaign of Solidarity with the Syrian Revolution, who spoke about the resurgence of protest and civil activism in Syria since a recent lull in the fighting.

The petitioning of Amy Goodman paid off. But she has still featured Seymour Hersh (in typically non-adversarial interviews) far more often than she has featured Syrian activists who represent the civil resistance on the ground. On the DN! webpage, where the Munif interview was displayed, the numerous dictator-shilling comments from Goodman’s followers were as disgusting as they were predictable: the fruit of years of pro-regime programming on America’s foremost leftist radio/TV news show.

Worse still is Counterpunch, one of the most widely read online news sites on the American left despite its propensity for giving voice to paleocons and exponents of the far right if they take positions in support of the dictatorships in places like Syria, Iran, and Belarus.

But this January 29, they outdid themselves, posting a piece titled, “The Rise of ISIS and Other Extremist Groups: The Role of the West and Regional Powers.” The writer was none other than Bouthaina Shaaban, official public relations advisor for Bashar Assad since 2008. This time not just a useful idiot of the Anglo-American progressive talking-head set, nor another paleo-right dictator-enthusiast, but an actual paid flack of the dictatorship.

The piece took the usual line, portraying the Syrian Revolution as contrived by the West and a jihadist initiative from the start. In other words, a perfect reversal of reality.

The Syrian Revolution shamefully received no support from the outside world for years, which is what allowed the jihadists to gain a foothold after the regime that Shaaban speaks for attempted to drown the peaceful protest movement in blood. Shaaban offered not a word about these massacres, but painted the emergence of an armed resistance as an arbitrary and foreign-fomented response to what she characterized as the “conciliatory” approach of the regime!

Shaaban is in effect the Goebbels of Damascus—defending the practices of the Asaad regime defiantly and charging Western media with presenting a false picture of her government. For her work, she was rewarded with a typically gushing interview by Robert Fisk, another icon of the left, in Britain’s The Independent on Oct. 27, 2011. He did ask her about charges of the Syrian government’s repeated massacre of protesters. But the headline trumpeted her disingenuous retort: “The army was told not to fire at protesters.”

Then, there’s Jill Stein, 2016 presidential candidate of the Green Party, whose popularity soared among lefties after Bernie Sanders conceded the Democratic Party nomination to Hillary Clinton. Stein has repeatedly engaged in parroting of Assad regime propaganda.

After the Ghouta sarin-gas attack in 2013, when Obama briefly threatened air-strikes against Assad’s military forces, Stein said: “President Obama’s rush to war risks a repeat of 2003, when President Bush’s order to invade Iraq prevented UN inspectors from discovering that Saddam Hussein’s alleged WMDs, one of the stated reasons for war, did not exist.”

Talk about fighting the last war! To say this days after a chemical massacre in which some 1,400 perished simply demolishes all the Green Party’s empty talk about human rights. The chemical weapons in Syria assuredly existed, and still do, if we count the repurposed chlorine that the regime continues to use.

And as for the “rush to war”—are we supposed to believe that Syria (with cities in ruins, some 12 million displaced, and more than a quarter million dead) is at peace as long as the U.S. isn’t involved? This is imperial narcissism, the internalized arrogance that sees everything as about the U.S., and renders local contexts (even those as crushingly obvious as the Syrian war) completely invisible.

Titled, “Elections in Syria: The People Say No to Foreign Intervention,” it crowed about Assad’s supposed widespread support among the Syrian people, and how the opposition was “fomented” by the “gangster states of NATO.”

Perhaps the saddest thing is that even those small sectors of the stateside left that have been serious about solidarity with opposition forces in Syria are themselves divided. On one side are anarchists inspired by the experiment in Rojava. On the other are a handful of organizations, mostly led by Syrian and Arab immigrants and ex-pats, organizing to support the civil resistance movement among Syria’s Arab majority. These are loosely allied in the Committee in Solidarity with the People of Syria (CISPOS).

These two currents have grown more suspicious of each other as the situation on the ground in Syria has deteriorated, with fighting breaking out between the Rojava Kurds and elements of the Free Syrian Army (FSA).

The situation has become much more urgent with the current Turkish intervention in Syria, with U.S. acquiescence. The U.S. has backed the Rojava Kurds as the most effective anti-ISIS force on the ground, but it now appears they are being betrayed in a Great Power deal.

However, the Rojava Kurds are also allied with other more secular and progressive elements of the FSA. Stateside activists can play a role in bridging this divide and supporting liberatory change in Syria. Anarchists can start extending solidarity not only to the Rojava Kurds, but also to the Syrian civil opposition generally—to groups such as the Local Coordination Committees, that are still building popular power at the grassroots level despite the war.

And, we can vocally repudiate the self-appointed leaders and mouthpieces of the American left that are flatly, dramatically on the wrong side in Syria.

“The Rojava Revolution: Worth fighting for; a fight worth being in solidarity with”

“Challenging the Nation State in Syria”