“A revolution is an exceptional event that will alter the history of societies, while changing humanity itself. It is a rupture in time and space, where humans live between two periods: the period of power and the period of revolution. A revolution’s victory, however, is ultimately achieving the independence of its time in order to move into a new era.”

Omar Aziz was in his sixties when he returned to Syria in 2011. He’d been working for an information technology company in Saudi Arabia but now he wanted to participate in the uprising raging against the four-decade dictatorship of the Assad family. Together with other activists, Aziz began distributing humanitarian assistance to displaced families from the Damascus suburbs under attack by the regime. He was inspired by the ongoing protests in the face of regime bullets and tanks, yet believed that demonstrations alone were not enough to break the regime’s dominance, and that revolutionary activity should permeate all aspects of people’s lives. 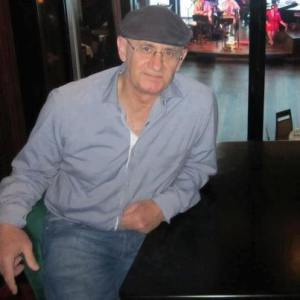 Before his arrest on 20 November 2012, and death in prison in February 2013, he promoted local self-governance, horizontal organization, cooperation, solidarity and mutual aid as the means by which people could emancipate themselves from the tyranny of the state.

Writing in the eighth month of the revolution, when protests were still largely peaceful and communities still lived under the authority of the state, he argued that “the revolutionary movement remains separate from daily human activities.” He continued: “there are ‘divisions of daily work’ between day-to-day activities and revolutionary activities.” The risk lies “in the absence of correlation between the spheres of daily life and the revolution itself.” [2]

Aziz advocated the establishment of local councils to narrow this gap. In his vision the councils, made up of volunteers with experience in various fields, should have a number of responsibilities: finding safe houses for the displaced, organizing on behalf of detainees in the regime’s prisons and providing support to their families. Aziz also believed that it was the role of the councils to promote human solidarity and cooperation by providing a forum in which people could collectively find solutions to the problems they face, and to build horizontal links between councils in different regions.

He argued that the councils should also coordinate the resistance to the state’s takeover of land in cities and suburbs and the eviction of residents to make safe residential zones for government officials and army officers, shopping areas, and the implementation of other business plans in order to accommodate the wealthy.

A few months later, Aziz wrote a second paper. [3] The situation in Syria was changing rapidly. The state’s brutal response to the protest movement led to the militarization of the revolution as people took up arms in self-defense. And land was beginning to be liberated. The community organizing the uprising had brought about inspired him, such as organizing food baskets and converting houses into field hospitals. Such acts, he believed, showed “the spirit of the Syrian people’s resistance to the brutality of the regime, the systematic killing and destruction of community.” He described how activists formed coordination committees at the beginning of the revolution to organize media coverage, document activities and record regime violations, and how they then expanded to include emergency aid and medical services. He believed that new relationships were being formed which enabled people to break free of the state’s dominance, and he saw this as evidence of a transformation occurring in social relationships and values. For Aziz, this independence was the path towards liberation.

According to Muhammed Sami Al Kayyal, one of Aziz’s comrades, “Omar Aziz stood for the complete break-up [of] the state in order to achieve collective liberation without waiting for regime change or for one ruling power to replace another. He believed that communities are capable of producing their own freedoms regardless of political vicissitudes.” [4] Aziz recognized that the time of revolution was the moment the people themselves should claim autonomy and put in place as much of an alternative programme as possible. He again called for the establishment of local councils, this time highlighting more roles such as coordinating with relief activities, medical committees and educational initiatives. Building autonomous, self-governing communes throughout Syria, linked through a network of cooperation and mutual aid, organizing independently of the state, he believed a social revolution could be initiated. 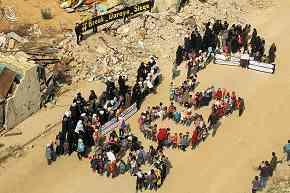 Omar Aziz helped found four local councils in the working-class suburbs of Damascus, before his arrest. One was in the predominantly agricultural town of Daraya. This town had a history of non-violent civil resistance, existing prior to the revolution with religious, not secular, roots. [5] Its activists followed in the tradition of liberal Islamist scholar Jawdat Said (1931-), who called for non-violent civil disobedience, democracy and the rights of women and minorities.

In Daraya, young men and women had organized campaigns against corruption as well as protests against the Israeli invasion of Jenin refugee camp in 2002 and the US invasion of Iraq in 2003. This protest, daringly organized without regime permission in a police state, led to the imprisonment of several activists.

When the revolution broke out in 2011, Daraya’s youth from both Muslim and Christian backgrounds took to the streets calling for democracy and the downfall of the regime. They held flowers as a symbol of peace in the face of soldiers sent to shoot them. Many were rounded up, detained and tortured. In August 2012, the town was subjected to a horrific massacre; hundreds of men, women and children were slaughtered by regime troops. This brutality only increased the determination of the resistance. Three months later the regime was driven out by locals who had taken up arms in self-defense. The town was now completely in the hands of its residents, and Daraya’s commune was born.

A Local Council was established on 17 October 2012, to manage the town’s affairs and help the internally displaced and injured. Its 120 members chose executives by vote every six months, and the council head and deputy were chosen in public elections, some of the first free elections to have occurred in Syria in over four decades. The Council provided all essential services such as water and electricity to the approximately 8,000 residents who remained from a pre-uprising population of 80,000. It set up a relief office which operated a soup kitchen and tried to build self-sufficiency by growing crops which it distributed to residents. The council ran three primary schools (all other educational facilities were out of operation due to repeated aerial bombardment). A medical office supervised the only field hospital which provided for the sick and wounded. Daraya’s autonomy was defended by a local Free Army brigade which was subject to the civil authority of the council.

Daraya represented the antithesis of the Assadist state. The people themselves built a society which was democratic and free. Alongside the activities of the council, a group of women founded Daraya’s Free Women to organize protests and humanitarian assistance. They began producing and distributing an independent magazine called Enab Baladi [Grapes of my country] to challenge the regime’s media monopoly and promote peaceful resistance to counter the state’s sectarianism and violence. Activists built an underground library, a safe haven where people could go to read, learn and exchange ideas. Grafiti artist Abu Malik Al-Shami painted hope onto Daraya’s bombed out walls.

But, in November 2012, the regime implemented a starvation siege trapping residents inside and stopping food and medical supplies from entering. Those who tried to flee or forage in surrounding land were shot by snipers. Poison gas, napalm, and over 9,000 barrel bombs were dropped on Daraya. The Local Council repeatedly called on the humanitarian community to fulfill its promises to break the siege: “We are being punished for daring to rise up peacefully for our freedom and dignity,” one statement said. “There are no extremists like ISIS here or Nusra. Those defending our neighbourhoods are all locals, protecting the streets from a government that has tortured, gassed and bombed us and our families.” [6] Women and children also held protests, recording and uploading them to the Web, calling on a deaf world to break the siege and end the regime’s violence. By the summer of 2016, the situation had deteriorated. A Jordanian/U.S. arms embargo on the Southern Front, combined with pressure on the coalition of secular and democratic Free Army forces to back off on attacking the regime forces there, had freed up Assad’s resources to intensify the assault on the town. [8] 1 The last remaining hospital in Daraya was destroyed and agricultural land, the sole source of food, was seized and crops burned.

With a limited supply of weapons, no assistance from outside, facing starvation, the resistance in Daraya held out for four years against the state and its imperialist backers. But on 25 August 2016 the town fell to the regime. All residents, both civilians and fighters, were evacuated, perhaps permanently. Some civilians evacuated to the Syrian government controlled town of Harjalleh were arrested and are now in the regime’s dungeons. Assadist troops celebrated their ‘victory’ in an apocalyptic waste land of destroyed buildings, in a town empty of its people.

Omar Aziz didn’t live to see Daraya’s remarkable achievements. Nor was he able to witness other experiments in local self-organization, with varying degrees of success, across the country.

These local councils are not ideological but practical. Their first concern is to keep communities functioning in areas where the state has collapsed. They remain independent of political or religious directives, focusing instead on issues of immediate relevance such as service provision and food assistance. They work through the prism of their own culture and experience. As alternatives to state authoritarianism, their libertarian tendencies are undeniable.

By March 2016, it was estimated that there were 395 active councils in cities, towns and neighbourhoods, half of them concentrated in Aleppo and Idlib provinces. [7] This estimate was made a few months following Russia’s military intervention to prop up the failing regime, which saw the loss of great swathes of liberated territory, placing these autonomous communities under threat. At the time of writing, other revolutionary suburbs around the capital are at risk of falling to the regime as a result of its “kneel or starve policy.” So too is Al-Waer, the last remaining revolutionary stronghold in Homs. And the 300,000 residents of liberated eastern Aleppo are under siege once more.

These experiments in community democracy pose the greatest threat to all the states now involved in Syria (whether pro- or anti-regime) as well as to the extremist and authoritarian groups which seek power for themselves. This is why they are under such savage attack.

Leila Al Shami is co-author, with Robin Yassin-Kassab, of Burning Country: Syrians in Revolution and War. She lives in Scotland and blogs at leilashami.wordpress.com.

6. Letter written by a member of Daraya’s Local Council. Cited at “The Syria Campaign” https://act.thesyriacampaign.org/sign/save-daraya?source=tw&referring_akid=.166567.9L5obO