The Spanish Revolution 80 Years On

Works referred to in the text

“History is one more battlefield among the many that exist in the class war. We must learn the lessons of the defeats of the proletariat, because they are the milestones of victory.”

In July 1936 there was a military-fascist rebellion against the Spanish bourgeois Republic. It was immediately met by anarchist-inspired armed resistance of the urban proletariat who, after defeating the military rebels in half of Spain, began the revolutionary process of establishing grassroots self-management in expropriated industry.

At the same time, their counterparts among the peasantry created similar grassroots organs in collectivized agriculture.

This Revolution revealed the possibilities for replacing the horrors of capitalist tyranny with a social order based on individual and collective freedom. It saw the birth of workers’ and peasants’ councils, creating the opportunity for ordinary people to live with dignity and control their own lives.

But the military rebels were supported by modern German and Italian arms, while the Western democracies, claiming neutrality, refused to aid the Spanish Republic. The anarchists were faced with the conundrum of how to relate to the Republican government, and the intrigues of Communists enabled and supported by the U.S.S.R.

Tragically, the revolution made by the Spanish workers and peasants was crushed, and hundreds of thousands fled in early 1939, seeking refuge in other parts of Europe and eventually all over the world. (FE staff) 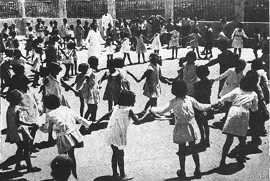 I belong to the generation of anarchists who grew up in Britain during the 1960s and ‘70s with the reverberations of the Spanish Revolution, that were still present from 30 years before.

Anarchist exiles from Francoist Spain were living in the UK and Europe and you often met them at anarchist political and social events. They were a constant reminder of the actual realization of anarchy on a large scale as well as an indication to some of us of the contradictions of anarchism when put to the test. Nearly all the participants in that most wonderful of revolutions have died now All that is left are the books, pamphlets, and the memories of conversations that have somehow remained as the years have moved on.

The role of anarchists in the events preceding July 1936 in Spain and their response to the attempted military coup by right wing generals became a kind of road map; something to be held up to the light and constantly studied.

As the 20th century crawled to its end, that map gave us confidence that even if we were temporarily lost it would still lead to where we wanted to go if studied enough. There were a myriad of other influences on our construction of anarchism, but Spain was somehow always there, always a reference point we couldn’t (and didn’t want) to ignore.

Some of us supported the Spanish anarchist resistance that had been taking place since 1939, learning about Sabate, Facerias, Capdevila and all the others who had never given in and continued military resistance against the Franco government inside and outside of Spain. Nothing had died. It might have been seriously ill, but its heart was still beating.

Central to our belief was the necessity of a large scale anarchist revolution in order for anarchy to really exist.

Just how it would be carried out was always open to debate-and debates there were aplenty because it is what small groups of anarchists did, and still do.

We may have been small in numbers, but the wheel was still in spin and there was a sense of possibility. Of course, that possibility took some heavy knocks. Comrades would come and go. Strikes would be defeated. Working class communities and cultures would be systematically destroyed. Lives of articulate men and women would be smothered and repressed and all the potential in them drained away by a system of unblinking economic and emotional cruelty.

We celebrated each victory in the hope it would lead to better things. One would be dispirited for a while, but then returned because what was the alternative?

That road map is on my mind a lot now. Having been used for 47 years or so, it really is worn and cracked. It may well be that for younger comrades it might be of little practical use. Some of them have little time for history. What’s happening now is all that matters.

Times have changed so much that those hot July 1936 days in Spain may be interesting, but hardly relevant to the demands and needs of today. As capitalism and all the interpersonal power structures adapt and mutate, anarchism needs to adapt to these changes if they are to be successfully opposed.

Couple that with the determination of some within anarchism to plunder history simply to justify the positions taken now or claim some type of validity by linking ourselves to past people and groups and it seems that the legacy of all those Spanish comrades who brought anarchy alive on such a large scale is either to be dismissed as irrelevant or to be used as ciphers to justify academic ideas or group positions.

New information about Spanish anarchism is constantly being discovered and written about. Like all good history, this knowledge challenges preconceptions and makes it necessary to reassess what was previously understood. We know that the massive anarcho-syndicalist and anarchist organizations, the Confederación Nacional del Trabajo and Federación Anarquista Ibérica (CNT-FAI) were based in working class communities.

Not that communities which thought the same, that enjoyed the same activities, wore the same clothes, necessarily enjoyed being in each other’s company all the time.

Like all working class communities there were tensions, resentments and old enmities.

Poverty and exploitation and cultural re-enforcement will do that.

The point is that anarchists were part of that community and were seen as belonging. They weren’t outsiders telling people what to do and how to think. Their propaganda demonstrates the ability to express quite complex ideas in straightforward ways. Anarchists spoke constantly to people who weren’t anarchists rather than just to other anarchists.

Consequently, the CNT-FAI provided a home to many from these communities. Some were anarchists, some were sympathetic to anarchism, seeing anarchists as speaking a lot of sense. Others were there because they saw the anarchists defending jobs, individual freedoms and communities.

Some were there simply because their friends were. Some were there for reasons we may never be clear about. From what we can tell many of them seemed to think that it was possible to destroy Spanish capitalism and somehow create a fairer world that they could share in.

What we do know, thanks to the work of writers such as Chris Ealham, Agustin Guillamon and others, is that the role that the CNT-FAI Defense Committees played in these areas was more important than some of us had realized.

Based in their communities, the role of the Committees was to help prepare for revolution and when it happened they would have preparations in place to defend it. On a day-to-day basis they helped combat evictions, rent rises, and the high price of goods (a friendly word to a shopkeeper worked wonders!).

They did help support some cooperative food ventures and the ateneus (educational and social centers), but there was not much more of what might now be called pre-figurative activities because they were seen as too much of a threat by the Spanish state. There was, though, conversation and it may be necessary to dig much deeper to see what role the cafes, bars, and living rooms played in the passing on of ideas and sense of possibilities.

We also know that when the military revolted in July 1936 following an electoral victory of the left, millions of people saw the possibility of massive social change because of the immense work the anarchists had put into those urban and rural communities.

They could run their own work-from transport systems to boxing competitions, from iron foundries to net makers.

They could change who they were and re-define what was possible in their lives. The potential in them blossomed and flourished. For many it was a revolution in everyday life and became the high water mark of 20th century revolution. The changes were so exciting and so extreme that I am not sure that people understood quite what was happening.

One wonders if all those writers and volunteers in Spain had the language skills to explain just how profound the economic and personal change was. I am not sure we even understand it fully now

We can see that once the military uprising took place and people moved onto the streets to resist it, the consensus decision making of the CNT-FAI broke down. Members were here, there, and everywhere-rushing to meet the enemy, taking over factories, dead in the street.

There was no time left to have discussion upon discussion for the majority of anarchists and all sorts of positions were adopted by those comrades who had the time to make them and were still there. It was the CNT-FAI after all, and if the decisions made by these higher committees were wrong and opposed to everything you saw as anarchist practice (the militarization of the anarchist fighting columns, anarchists entering the government and so forth), few turned their backs completely on the organization.

Thousands of CNT-FAI members had died because they were members of that organization, and over the years countless numbers had been brutally tortured and damaged because they, too, were Cenetistas. Juan García Oliver described the CNT-FAI as a tomb that its members had to respect; you kept faith with your dead and maimed. To turn against the decisions of the organization was to turn against those memories of loss and courage. Where else could you go?

All of this meant that the years of defeat were bitter and brutal for the CNT-FAI and we realized that as we worked with and learnt from the exiles and those who began to take the struggle to the Spanish state anew. Even so we still picked up the road map that they had given us and kept it close.

We weren’t looking for perfection; we were looking for wholesale change. We still are. Perhaps we need to consider how to have conversations with those who the CNT connected with so naturally. They consciously appealed to the poor, the outcast, the working class, the unemployed and the imprisoned; to men, women and children who had no political interest at all apart from a sense of disconnection that filled their lives.

I’ll pick up the tattered and stuck-together old map, cross off the odd road that’s been abandoned and draw in the new ones that have been made.

If we aim for an anarchy that is as rich in potential and as popular as that in Spain and we are welcoming to those who are not exactly like us-whose ideas are not quite as “correct” as ours, we might be on our way to somewhere exciting.

That said, we will go nowhere if we don’t have that sense of possibility-so integral to Spanish anarchism-to pass on.

Works referred to in the text

Barry Pateman is a member of the Kate Sharpley Library collective (KateSharpleyLibrary.net). Together with Jessica Moran, another collective member, he has recently edited Alexander Berkman’s Prison Memoirs of an Anarchist, available through AK Press. AkPress.org.

See the Fifth Estate website, for a Spanish Revolution Resource page with links to articles describing the events, analyzing the political, economic and social evolution, and the experiences of comrades—our spiritual ancestors—who risked all to bring a new world into being.

There are links to articles from earlier FE issues as well as from other sources. All these can stimulate necessary reflection about both the successes and failures of this important period in anarchist history.