How White Supremacy Progresses
Fifty Years of Lessons from Detroit 1967 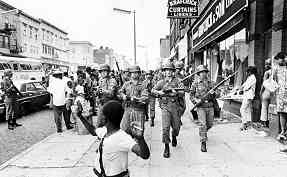 The almost all white Michigan National Guard charges down Detroit’s 12th Street where the 1967 Rebellion began.

Frank Joyce, was the Fifth Estate News Editor 50 years ago, and rejoins us with reflections on the 1967 events.

“I calmed the tremor in my gut. I was in close quarters with some representative specimens of the most dangerous creatures in the history of the world, the white man in a suit.”

The normal pattern in our culture is to manufacture amnesia about past unpleasantries such as slavery, Native American genocide, Viet Nam, and other assaults against people of color.

It is surprising, therefore, that those in power have invested considerable resources in high profile attention to the 1967 eruption in Detroit that brought federal troops to the streets of the city

The Detroit Historical Museum, the Detroit Institute of Arts and other local institutions have been funded to do various reflections. Detroit media is involved, as well.

And, it’s not just local. The Hollywood team of Kathryn Biegelow and Mark Boal, award winners for hyper-violent pro-war movies like “The Hurt Locker” and “Zero Dark Thirty” has finished shooting “The Untitled Detroit Project.” The storyline is “A police raid in Detroit in 1967 results in one of the largest citizen uprisings in the United States’ history.”

Why is the establishment making a big deal out of the anniversary? Most likely, because it thinks it’s important to settle some issues in their favor—including what to call it.

Many whites vigorously resist the term Rebellion in favor of riot. No surprise here. As I argued in a 2016 Detroit Free Press op-ed piece:

“The history of criminalizing most behavior by blacks goes back to the origins of white supremacy itself. Moral supremacy by fiat, force and power is one of white supremacy’s core components. And as we know from whites destroying property by throwing tea into the Boston Harbor, Rebellion is in the eye of the beholder.

“Especially in a nation whose founding mythology honors insurrection, the word Rebellion has serious legitimacy. Riot on the other hand conveys criminality. Hence, most media and many whites prefer riot. Perhaps more importantly, using the term riot perpetuates white denial that blacks would have anything to rebel about.”

Of course words matter. But there is also a lot to the cliché that actions speak even louder. Specifically, the actions that White Power took following the 1967 uprising powerfully suggest they thought it was a Rebellion. For hundreds of years, White Power’s reaction to real and perceived threats has been punishment and control. Post Rebellion Detroit is no exception.

The fires of July 1967 still smoldered when the City Council agreed to finance a massive purchase of machine guns, armored personnel carriers, ammunition and other military supplies for an enlarged Detroit Police Department.

Then mayor, Jerome P. Cavanagh, also advocated that the federal government subsidize a “back-to-the-land” movement to the South as a means of reducing the Negro population in Northern cities like Detroit. The cost, he argued, would be much less per family than transferring the same family to the welfare rolls.

Cavanagh and the other proponents of ethnically cleansing cities of blacks who migrated north to escape Jim Crow in the early to mid 20th Century sensed that capitalism had a problem. The growing mobility of capital, combined with technological displacement, was and still is making vast numbers of the urban industrial workforce superfluous.

The urban ethnic cleansing scheme fizzled. Instead, other strategies were deployed.

No one better expressed the prevailing white attitude guiding the plans than long-serving white supremacist, suburban Oakland County executive, L. Brooks Patterson. As recently as 2014, in a New Yorker magazine profile, he reaffirmed an earlier statement, “What we’re going to do is turn Detroit into an Indian reservation, where we herd all the Indians into the city, build a fence around it, and then throw in the blankets and corn.”

Patterson’s degree of honesty is unusual. In fact, if you think of White Power as a corporation, one of its biggest divisions would be the department of denial, confusion, and obfuscation. When it comes to Detroit, that branch has done effective work. Rather than acknowledge the overt and covert racist motivations of government and corporate policies toward the city, it promulgated alternative explanations.

First and foremost, as race-based capitalism has always done, it blames the victims. There are any number of variations on this trope. The most common is that Detroit degenerated because the Rebellion caused whites to flee the city.

This turns cause and effect upside down. Did white flight and other forms of disinvestment intensify after 1967? Yes. But it started far earlier. Racialized relocation of jobs from Detroit was well underway by the 1940s. Repressive treatment of blacks by the all-white police force was a constant. So was every other form of racial discrimination. By 1967, African Americans had plenty to rebel against. And they did.

The problem is that macro forces of this magnitude should have been evenly distributed across Detroit. But they weren’t. Predominantly black Detroit suffered adversely in ways that the white suburbs did not. Which is exactly the outcome that race-based capitalism is designed to achieve.

How did they do it? Recognizing the synergistic effect of these policies, following is a partial list of what White Power did:

What continues to amaze about Detroit exemplifies what is remarkable about the entire history of enslaved blacks in America. To accept even a vulgar version of “survival of the fittest” is to marvel at the ability of Detroiters to function under the difficult circumstances enforced over the last fifty years. This is not to minimize the suffering or the pain inflicted. Rather, it is to acknowledge the innovation and resourcefulness with which Detroiters are making a new way out of no way.

Nothing is off limits. As increasing sections of already marginalized populations are being moved into a post-capitalist world—no wage work; no commodity consumption—people in Detroit are involved in autonomous projects that are a hotbed of new thinking and action in the theory and practice of what comes next.

These include everything from innovative urban agriculture to new approaches to education, community conflict resolution such as Peace Zones For Life, experiments in new technology driven, community based manufacturing, inventive media, art, and spirituality.

Revolutions always begin with creating a new world in the shell of the old. Detroit is on its way.

Frank Joyce is a lifelong Detroit-based writer and activist. He is co-editor with Karin Aguilar-San Juan of The People Make the Peace: Lessons From the Vietnam Antiwar Movement.

His Fifth Estate articles at the time of the Detroit Rebellion are at FifthEstate.org/archive.

See also in this issue: “Excerpts from a Rebellion: How the Fifth Estate Reported It” and “1967: Detroit Explodes”