Surrealism on the Barricades 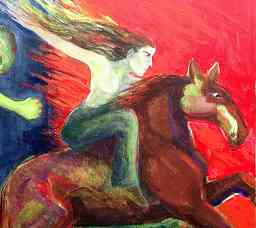 Back in 1995, as the banlieues burned, the Paris Surrealist group put out a tract entitled Warning Lights: A Surrealist Statement on the Recent Riots in France, delineating the unrealized potential of such multi-racial uprisings in the inner suburban immigrant quarters to spread across the country.

In this publication, the Paris Group dreamed out loud that the stark despair that initially fueled the riots could transform itself from a purely destructive trigger for the cathartic enactment of localized rage into a concurrent vehicle for a deeper and more widespread rebellion.

As they expressed it:

“The rulers have been given a good hotfoot and have been forced to unmask themselves. Where the police abuse their powers, the state of emergency gives to their abuse the legitimacy that it lacks. In a flash, such warning lights have revealed the return of a possibility that seemed to be lost: that of throwing power into panic. From now on, we can imagine the strength of an uprising that would-beyond the inhabitants of the ghettos-include the whole population suffering from the rise of impoverishment, and would turn into civil war against the organs of capital and the state” (Paris Group of the Surrealist Movement, 1995).

In this vision, the flames of the radical imaginary would be reignited on the barricades.

The quote, which was supplied to them by Franklin Rosemont of the Chicago Surrealist Group, led them to urge artists to make an exodus from the galleries into the streets.

In their confrontational 1967 “Wall Street is War Street” march, twenty five men in black wearing balaclavas and skull faces marching against capitalism and for “total revolution” projected a militant identity that can be seen to have been a seminal influence on future radical street tactics.

As art historian Gavin Grindon has acutely observed, “This was the first use of collective, masked-up black dress during a demonstration in an urban centre among Western social movements. As this style was combined with the tactics of breakaway groups, police confrontation, and property damage, the group anticipated, and perhaps indirectly influenced, the style and tactics of later “black bloc” groups which emerged en masse among 1980s German autonomen.”

As time went by, Black Mask would increasingly emphasize anarchist direct action tactics, renaming themselves the Up Against the Wall Motherfuckers in solidarity with the burgeoning black liberation movement of the times.

This brings us to the Ferguson uprising of 2014 in the States which was kicked off by a deadly incident of police brutality in which Michael Brown was murdered by the forces of law and order. As Crimethlnc reported firsthand, the complexity of insurrectionary events there was played out in relation to an internal struggle for meaning that unfolded among the diverse participants in the uprising.

“Liberal leaders and authoritarian groups have far and wide fought hard for control of the narrative in Ferguson. The recuperative power of the black left was in full effect, expressed via an array of tactics to discredit everyone who could not be reconciled with the state. Despite the forces arrayed against them, many people in Ferguson were determined to gain control of the streets, and pushed the would be managers aside” (Crimethlnc, 2015).

In contrast to the pacifying managerial narrative emanating from the accomodationist voices of those career activists and erstwhile reformers that sought to narrowly frame these events in civil rights terms; the St. Louis Surrealist Group, in the tradition of not only the above Warning Lights diatribe, but of the Chicago Surrealist Group’s polemics on the Watts riots of 1965 and 1992, boldly proclaimed:

“Our solution prescribes, among other things, the immediate dissolution of the police and other structures of authority, brutality, exploitation, and conformity, as well as the creation of cities of wonder where people of all races, ethnicities, genders, and other diverse affinities can mix in an environment of creative fecundity based on absolute freedom.” (St. Louis Surrealist Group in Hydrolith 2, 2014).

Here was an inspired and inspirational negation of mutual acquiescence that at the same time affirmed an exhilarating vision of mutual aid.

The insurrectionary freedom of the riot can be both a freedom to take direct action against police repression by burning a cop car or engaging in an unmediated redistribution of wealth by looting, and a freedom from the illusion that fundamental change can come from within the system. The latter illusion acts as one of the bulwarks of mutual acquiescence.

As Key MacFarlane has pointed out in relation to the Baltimore uprising of 2015, which was triggered by the street-level execution of Freddie Gray by the police, the “nothing to lose” stance of the rioters was a political flashpoint.

“For those who side with it, it rules out the possibility of reform or progress under current structures of mediation. We don’t want your shitty low- income apartments the fires say. We want to incinerate every last remnant of a dying generation-from the convenience stores where we give our money to a system that casts us aside, to the churches whose leaders tell us we have sinned. From the apartment buildings where we live, to the senior homes where we go to die. For so long we have paid the rich in complacency, and when we have not we have been shuttled off to prison-to smolder.” (MacFarlane, “Rites of Passage,” online 2015).

The flames of the riot are disconcerting not only to the powers that be but to their loyal opposition. By dismissing burning and looting as irrational and ineffective, the latter miss their incendiary importance in incinerating the debilitating illusions that buttress mutual acquiescence. Accordingly, they attribute such acts to the political naiveté of the participants or circulate rumors of police infiltration rather than trying to understand them as indicators of radical refusal.

As Scott Jay argues in deflecting the claim that most of those who engaged in the Baltimore riots were merely police agents provocateur:

“There are black people all over the city throwing rocks at the police. We do not need to make up reasons why somebody would do this. The very concern that ‘peaceful protest’ is being ruined by people throwing things is a completely backward approach to social struggles, usually pushed by liberals who really do want to keep protests symbolic for good media coverage and to appeal to the good nature of those in power” (Jay, 2015).

Jay’s article evidences a struggle about meaning in relation to rioting that is at once tactical and strategic. Anarchists tend to be concerned with fronting tactics that avoid re-legitimatizing institutions of authority while strategically setting the stage for social revolution.

Ron Sakolsky, who has broken loose from the United States, now resides across the border-lie on a little rock in the Salish Sea called Sla-Dai-Aich.

His upcoming book, Birds of a Feather: Anarcho-Surrealism in Flight (Eberhardt Press), will be out sometime this Spring.