An Anarchist in Poland
In One Gulp! Poland Swallowed Up by Consumer Capitalism

During a recent 10 day visit to Western Poland (Wielkopolska) to do research for a novel based on my family history, I spoke with many people in the street, in bars, cafes, on trains and buses trying to understand the new realities of Central Europe. 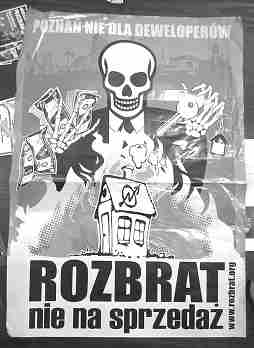 “Poznan not for developers; Rozbrat (squat) not for sale”

Poland! Forever screwed by its own old aristocracy, then by Germany and Russia, then by Polish and German fascists and Soviet communists, it’s now being ravaged by 21st century international capital. But hey, fastest growing economy in Europe today!

There were so many incongruities. Like getting off the plane in Warsaw, heading into the centre of the city, and wondering, “Is this Toronto? Montreal? Vancouver?”

MacDonald’s, Kentucky Fried Chicken, The Gap, Adidas, Zara outlets, all jumbled together, rubbing shoulders with shiny, ugly new condo towers, blocking my view of Poland through the windows of an ultramodern train.

All the promises of the Solidarnosc-era Poland that ended Soviet domination, ones imagined by the more anarchist-leaning members of that mass working class organization of maybe a new, not entirely capitalist direction for post-Soviet, post-Communist Party Poland, disappeared.

In one gulp. Gobbled up by consumer capitalism. By mega corporations eager to re-pocket the average $700 per month salaries they pay their Polish workers. And most Poles went along with the deal, smiling, willingly.

My former cabaret rock and roll band, Rhythm Activism, toured Poland a few times, once with our satirical show, “Welcome to Capitalism, Poland.” We were greeted by shocked, disbelieving Poles who couldn’t accept that not all of us in the West were rich, and that late 20th century capitalism made us pay, and pay, and pay some more for its illusions, and would make them pay, too.

My poor Poland today has now embraced the worst of North American consumer culture and built a church of capitalism to worship it, glorify it, lust after it. Ordinary working class Poles pray and pray some more that they, too, one day will really profit from it, despite their second class citizenry throughout the European Union (EU)—the cheapest workers around, an airplane seatmate banker told me.

Under the former Communist Party regime, a fierce repression reigned. People were afraid to speak their minds. Anarchists, like other dissidents, were part of an entirely underground movement. I used to meet Polish activists in secret. But at least social housing, like education, healthcare and social services was a national right. Everyone was housed, comfortably.

Now, gentrification and foreign investment are ravaging the cities. Foreign investors own 70 percent of the historic inner city of Krakow, turning it into high-priced tourist accommodation. Poor tenants are forced out. Anarchists are doing their best through incredible community organizing efforts to stem the loss of affordable, decent, secure housing and protect the poor in major cities, but it’s a losing battle.

ZEMSTA has been attacked by local nationalist goons more than ten times in its five years of operation. The perpetrators are never detained. Earlier this year, the police disappeared for 20 minutes after one large demonstration of nationalists, allowing them to break windows in ZEMSTA and try to burn it down.

This became a scandal, and anarchists and Poznan resident supporters organized a big demonstration to denounce the crime. The nationalists then attacked them, as did the police. ZEMSTA has survived these attacks and even expanded their premises.

Anarchists took me to visit the famous, impressively well-organized Rozbrat squat in Poznan. On the overgrown grounds of a former industrial site sat more than a dozen one story buildings; living quarters, with a fully stocked, clean and orderly collective kitchen, a library and documentation centre, a workshop full of tools; a fully equipped gymnasium where the residents train to defend themselves from fascist goon attacks.

There is a huge performance space for live shows. Scattered everywhere on the grounds were sculptures and other works of art and food gardens. The entire compound was surrounded by a high brick wall topped off with shards of glass.

Poznan anarcho-syndicalists spoke of their efforts to organize the few thousand workers in the massive local Amazon warehouse. They’re fighting for better working conditions and wages as part of their OZZ Workers’ Initiative (Ogolnopolski Zwiazek Zawodowy Inicjatywa Pracownicza), and collaborate on actions with their German and French Amazon warehouse comrades.

To date, they are active in 53 workplaces, from Amazon to Volkswagen, L’Oreal, and a brick factory. It is a large and growing initiative, especially in the public sector. They challenge company unions like the moribund Solidarity that collaborates with the current Polish government.

In larger cities like Warsaw and Poznan, there are racist and fascist graffiti and posters everywhere: “Keep Poland white!” “Immigrants stay out!” “White power! White honor! White pride!” “Clean Blood!” Stickers at the entrance to one pub in Poznan read, “Entrance for whites only.”

Other graffiti attacks anti-fascists and calls for physically assaulting them. Poland is governed by a xenophobic, intolerant, ultra-nationalist and populist right wing party, Law and Justice (PiS), dedicated to “keeping Poland for Poles,” refusing refugees, and preventing ‘Islamization.”

Like its political counterparts elsewhere, it serves to legitimize and encourage the far right, still only a minority in Poland, but growing. All of this in a country where countless commemorative, bronze plaques are visible in parks, on apartment building walls, on the sides of churches, inside churches, on the remnants of a brick wall, on statues reading:

My relatives pulled out photo albums pointing to our family members and friends, ordinary Poles, butchered by Nazis during the war. This one was a union organizer. This one a nun. This one, a farmer.

I asked myself, what do all the Poles whose family members also died in WWII (20 percent of the entire population perished, the highest in Europe), what do they think of the direction Poland is heading today? Are they prepared to fight fascists and Nazis again? Will they help the trade unionists, the feminists, the environmentalists, the LGBTQ activists, the anarchists, and all the others who oppose the newest manifestations of bigotry, fascism, white power, hatred and violence?

What was reported in the media as an ominous, 60,000-strong nationalist, neo-fascist, white supremacist march through Warsaw on November 11 was not exactly that, Polish anarchist comrades pointed out.

“It wasn’t 60,000 nationalists,” they told me. “It was organized by the nationalists to manipulate Polish citizens, using patriotism to lure them in. But when the banners appeared in the march proclaiming ‘All Poland, White Only,’ a huge scandal broke out. WW II veterans stated publically that they wanted nothing to do with this narrative.”

My Polish anarchist friends from the Rozbrat squat pointed out in a press release that even though Polish mainstream media are quick to equate neo-fascists marching in the streets with anarchist anti-fascist actions, they deny facts.

“The nationalists, the neo-fascists espousing their racist, chauvinistic and xenophobic beliefs share similar views with those who committed the greatest crimes of the last century,” they wrote. “We can’t stand by passively and allow them to grow, to attract and manipulate more frustrated, hateful people.”

In Poznan demonstrations, my friends continued, anarchists make it clear that there is no place for fascism, hatred and prejudice due to colour, religion, sex or sexual orientation:

“Anarchism is very different from nationalism. We anarchists fight against the exclusion of minorities, against evictions, against violence against migrants and women, repression and deportations. We fight for the possibility of crossing borders, for higher wages, better working conditions and self-organization of workers across borders.”

The Poznan anarchists I met, like their historical predecessors, are organized and active in diverse communities and constantly networking. They’re dedicated in their struggle to challenge nationalists, fascists, the State, the church and the new rich, in the streets, online and where people live and work.

To counter this, anarchists are trying to rebuild independent, self-governed structures based on trade unions, tenant associations and co-operatives. They’re focused on making a difference in the poor Poland of today.

Norman Nawrocki is a Montreal cabaret artist, violinist, actor and educator. He has written a dozen books, several theatre musicals and cabarets and recorded over 50 music albums, solo and with his diverse bands. He tours the world performing music, theatre, poetry, anti-sexist ‘sex’ comedy shows, and giving ‘Creative Resistance’ workshops about using the arts for radical social change. nothingness.org/music/rhythm