In June and July, during a visit to Spain, my partner Marilynn Rashid and I spread some of the ashes of Federico Arcos, a companero, friend, and mentor to many of us in Detroit and Windsor, Ontario, including those on the Fifth Estate. Fede, as he was called, died in 2015 at the age of 94. 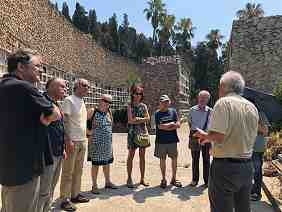 David Watson speaking to a small group of Barcelona antiauthoritarians
about Federico Arcos at the Montjuïc Cemetery in July.

Federico was a member of the Barcelona anarchist youth group los Quijotes del Ideal, which participated in the social revolution that in Spain before and during the Civil War of 1936–39

He and other friends in Barcelona maintained close relations with members of the revolutionary generation, including saving their correspondence and libraries from oblivion. Their relations reminded us of our long friendship with Federico and other members of the exile community here in North America.

After Fede’s death, his daughter, Montse, gave his ashes to Fede’s dear friend (and FE collaborator) Lorraine Perlman and me before returning to Spain, saying that it was her father’s wish. He had long told me he wanted me, his “hijo espiritual” (spiritual son), to spread them in Waldheim Cemetery in Chicago at the monument to the Haymarket martyrs.

Before returning to Detroit, however, Lorraine and I had the idea to spread a small amount in a Windsor park where he had planted a tree dedicated to his wife, Pura Perez Benavent (one of the Mujeres Libres, the famous anarchist women’s group in revolutionary Spain). We also spread a handful by a tree planted for Marco Arsie, his friend and union brother at the Ford plant where he worked.

The distribution of the ashes to various places became a kind of mission for me. It took a couple of years to get to Chicago, and in the fall of 2017, Marilynn and I spread a small amount at the Haymarket monument and the graves of Emma Goldman and other anarchists and labor militants there around it. (We had been there before, but had forgotten how quite a few Communist Party members are buried cheek by jowl with the anarchists.) Since, according to my research beforehand, spreading ashes without permission can cause problems with the authorities, we were unsure how it would go, and thinking we would return in a few months, took only a couple of cups of ashes.

As I was preparing to leave for Spain in June 2018, I realized that most of Fede’s earthly remains were still on a shelf in my study, and that he would have been happy to have them scattered near the graves of his heroes, Los Tres Grandes (as I heard him call them): the anarchist educator, Francisco Ferrer (executed by the Spanish state in 1909 after an anarchist rebellion), and Francisco Ascaso and Buenaventura Durruti (anarchist heroes killed during the Civil War).

Flying from Toronto to Barcelona, it dawned on me that Federico would not only end up scattered in multiple places, he would end up crossing more borders dead—a man without a country, true internationalist—than most people do alive. Suffering the vicissitudes of international air travel, security checks, and border crossings while carrying a dear old friend who had been a second father to me, I found myself speaking to the little box of ashes playfully, and it cheered me up.

In Barcelona, I saw friends I’ve known for 35 years. On July 11, after Marilynn flew in from Detroit, a week before what would have been Fede’s 98th birthday, ten of us gathered at the historic Montjuic Cemetery, on a small mountain overlooking the city and port. We admired the spot, took a few photos (with Paco filming us), and then, keeping an eye out for cemetery employees (and other gravediggers of the revolution), who might call the cops to report our unsanctioned interment, I rather awkwardly spread the ashes around the three graves.

We went to dinner at a restaurant afterward off the Placa Espanya, the square where revolutionaries and fascist rebel troops had mounted their barricades in 1936. We ourselves were all old now, taking the place of people we had known who had lived through the revolution’s defeat and yet maintained its vision.

The next day some of us returned to the historic castle at the peak of Montjuic to see an exhibit on Ferrer, who was imprisoned there in 1909 and shot in the dry moat below the castle walls in a brute, ferocious message to the working class after a violent rebellion had been suppressed. (Bewilderingly, one can now take archery lessons or attend an outdoor film on the lawn in the castle moat.)

Killing Ferrer might be compared to the hypothetical execution here in the U.S. of some combination of educators John Dewey and beloved Detroit anarchist Jo Labadie. Ferrer, entirely innocent of fomenting the rebellion, was a man of tolerance and reason, and for that they killed him. Exhibit curator Pere Solà, who gave us the tour, had created an elegant and moving display on this son of Barcelona and exemplar of rationalist anarchism.

As it turned out, next to the exhibit was a photo installation, “Memoria Perdida” (Lost Memory), selected from Miguel Gonzalez’s haunting book of photos of and commentary on the many mass grave sites in Spain from the fascist uprising, Civil War, and post-war Francoist reprisals.

Eighty years later, the search for victims and the matter of fascist monuments remain powerful themes in Spain. Some 200,000 Spanish civilians were murdered during and after the war, the vast majority by the fascists, and well over 100,000 remain unidentified in mass graves.

We had gone for the Ferrer exhibit and only stumbled on Gonzalez’s unforgettable testimonial, but the exhibits clearly belonged together as artifacts of barbarism, to borrow a well-known phrase—artifacts, however painful, that had the potential, if one paid attention, to be redemptive. Unfortunately, for the most part only tourists would see the two exhibits, high up the mountain and far away from the daily movement of Barcelona residents.

I still had a handful of the ashes in Detroit. When I returned, our friend and FE supporter Joaquín (Jack) Edo and I spread most of them in Woodmere Ceremony at the graves of his parents, Casiano and Manuela Edo, Aragonese anarchists who immigrated to Detroit in 1920. Jack was born in 1924.

The Edos were among Federico’s first friends in Detroit, members of the Grupo Libertad, who had raised funds for the anarchist movement in Spain. Elsewhere in Woodmere is the grave of Jack’s brother Miguel (Mike), and grave markers of five workers killed by Henry Ford’s thugs at the 1932 Hunger March. Jack and I couldn’t find Mike’s or the workers’ graves, but the last few tablespoons of Federico’s ashes will go there, by his friend Mike and his fellow Ford workers.

When I first arrived in Barcelona, I also visited the National Library of Catalonia, where Fede’s great achievement and legacy—an archive of some ten thousand books and documents, material he collected over six decades following his arrival in Canada in 1952—is still being catalogued.

One of the librarians, Nuria Altarriba, greeted my friend and host Corsino Vela and me warmly, and gave us a tour through reading rooms, restoration studios, cataloguing offices, and modern storage vaults containing books, manuscripts, medieval documents, and more.

It was a stunning place. Corsino said that he had done some research there, and one of the unexpected benefits turned out to be Federico’s extensive collection of North American anarchist materials, many unavailable in Spain. The catalogue can be found at cataleg.bnc.cat.

David Watson has written for the FE since 1969. He was an active member of the editorial collective from 1975 until 2005. A collection of thirteen of his essays from the FE, translated into Spanish, En el camino a ninguna parte (The Road to Nowhere, from the title essay) was recently published by Ediciones El Salmón.

The book includes an extended retrospective afterward by Watson. See edicioneselsalmon.com. To contact the press, which has published a wide variety of books of history and theory, contact revistaculdesac@gmail.com.