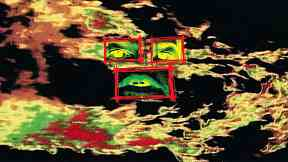 A strange looking man walks out of a Sam’s Club superstore with a shopping cart filled with diapers, food, and chocolate, without paying. He fooled the cart checkers with a fake receipt. As his feet touch the parking lot pavement, a rent-a-cop yells, “Stop!!”

The man quickens his pace, and books it to his station wagon, hastily throwing his stolen goods into the back seat. Just when he thought he might be able to escape, the fuckin’ car won’t start. The security guard catches up and knocks on the driver’s side window.

Our hero, defeated, rolls it down. The rent-a-cop hands him a chocolate bar and says, “You dropped something.” Our hero smiles, says thanks, starts the car, slams down the accelerator, and, as the car speeds away, she takes off her wig, laughs uncontrollably, and devours the Hershey bar.

That’s how the second anarchist film I made ends, and still one of my favorite projects, and the one that cemented my decision to destroy any chances of a respectable movie career. It was titled, “How I Love Shoplifting From Big Corporations” and completed in 2005 two years after subMedia went from being a mostly apolitical, single person, video production project to a full-fledged anarchist propaganda machine.

Since 2003, we have produced and published over 300 anarchist films and videos on the Internet. From super short, video ninja news reports to feature length documentaries, music videos, pop-ed films, and comedy bits.

We have traveled around the world screening our films and documenting movements of resistance from Australia to Greece, to Japan to Mexico, to name a few. Our films have been projected in social centers, street alleys, squatted buildings, and sometimes in real movie theaters, and on TV networks.

We have created radical films for a decade and a half without the hurdles and obstacles that come attached to foundation funds and government grants.

Years before crowdfunding, we were financing our operation through small donations made by people who believe in what we do. This gave us the flexibility to take chances and political positions that other well-intentioned filmmakers cannot.

For example, our flagship project for a decade was called It’s the End of the World as We know it and I feel Fine.

ITEOTWAWKIAIFF was a satirical news show hosted by the Stimulator, a disembodied foul mouthed avatar, who cheered every time a cop car was lit up, called out sellout NGOs for co-opting land defense campaigns, interviewed radical grassroots organizers, and said “fuck” more times than an NWA track. Nope, definitely not Amy Goodman, yet it was hugely popular during its duration.

One of our strengths is that we have earned the trust of people actively fighting capitalism and the state. This trust has given us access to people who usually refuse to speak to mainstream media.

For instance, during a spate of attacks on yuppie shops helping to gentrify a Montreal neighborhood, we secured interviews with some of the people involved. They could explain their rationale for smashing up the luxury boutiques without fear of being identified by the cops or that their words would be sensationalized or taken out of context.

We also interviewed Melvin Ray, an inmate involved in a 2016 Alabama prison strike in the U.S. He spoke to us via a contraband smart phone, at great risk, and informed our audience as to why prisoners were rioting.

Throughout the years, we’ve given a lot of focus to indigenous and anti-colonial struggles, especially in Canada where we are based.

We were the first media outlet to visit the Unist’ot’en Camp in British Columbia, who are now making international headlines in their battle to stop oil and gas pipelines from going through their territory. Camp spokesperson Freda Huson told us that the media work we did around their struggle was a key part of their early success.

One important factor to the longevity of subMedia is that this is our job. After years of being part of radical media projects that ended because of burnout, we made the decision that this could not be a side thing we did after work. The stakes are too high, and we take our work extremely seriously.

Right now, four of us work full time to keep subMedia going and we hope to continue growing our collective, so we can take on new projects. We are almost entirely funded by small donations made by our viewers.

Making anarchist films is not a youthful phase or an unsustainable endeavor. For us, this is a long-term anarchist infrastructure project, and one we want to sustain for years to come. Our hope is that more media minded radicals take the road less traveled, destroy their careers, and put their talents into supporting movements for liberation.

Franklin López is a filmmaker born in occupied Borike (Puerto Rico) who now lives and produces anarchist films in Montreal. subMedia’s 300+ films and videos are at sub.media.