The 2019 Fight Toxic Prisons Convergence is June 14–17 in Gainesville, Florida and will include speakers, panels, workshops, protests and cultural activities exploring the intersections of anti-prison and environmental struggles. fighttoxicprisons.wordpress.com Above: Protest march following the 2018 FTP convergence in Pittsburgh. / photo: Jordan Mazurek

The United States government promotes a fiction that it does not hold Political Prisoners/Political Prisoners of War (PP/PPOW). It presents the story that people in its prisons have been justly convicted of crimes for which they are incarcerated.

The official narrative is that the government has no bias against who it prosecutes and if a conviction were shown to be unfair or based on bias, the justice system would correct itself. This approach is a logical Ouroboros, a snake eating its own tail.

The existence of PP/PPOWs confirms that the system doesn’t believe it could sustain itself in open discourse, but must mask its brutalities by criminalizing resistance to its violence.

New York City Anarchist Black Cross (NYCABC), along with other ABCs and groups like the Jericho Movement, has worked over the decades to sustain support, awareness, and defense for U.S.-held PP/PPOW—people incarcerated for their political involvement who have sustained political integrity during their trials and incarceration.

Blue Ridge ABC (BRABC), based in western North Carolina, has a smaller scope and reach, but similar goals of support, defense and release of political prisoners. We’ve recently initiated a project to support political prisoners featured by groups like Jericho and NYCABC, plus politicized prisoners like Sean Swain, Keith “Comrade Malik” Washington, and others who face repression inside.

To publicize locked down comrades, BRABC is selling 6-packs of prisoner image buttons, mixed according to gender and race as well as what generation and movements the prisoners were involved in so as to generalize their support. 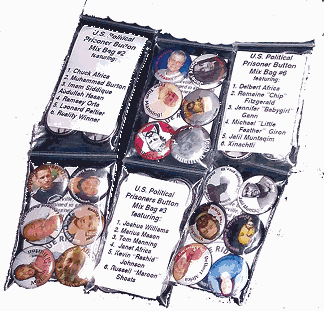 They sell online for $5 a 6-pack with the profits going to cover production and sustain BRABC in its letter writing and flyering costs. Buttons are inexpensive to make and share, plus they’re wearable so it encourages telling others about a case.

If you have a 1-inch button maker, there is a free PDF of the buttons at brabc.blackblogs.org/pp-ppow-buttons. If you want to order buttons for distribution to support your prisoner support group or individual distro, email blueridgeabc@riseup.net.

If you want ideas on how to organize an ABC, check out the BRABC website (brabc.blackblogs.org), drop us an email, or find us on Facebook and Instagram.

It’s about more than just supporting prisoners; it’s about growing a culture that can break free and supporting those who get caught on the way.

Bursts is a member of Blue Ridge ABC and co-host of the weekly anarchist radio show and podcast, The Final Straw Radio. thefinalstrawradio.noblogs.org

See “Resources for Prisoners & Supporters” in this issue.