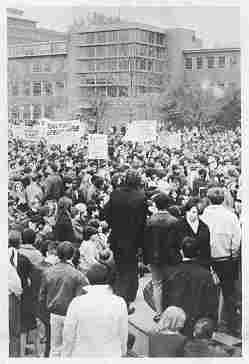 At a carnival, when disruption strikes, the call for help goes out: “Hey Rube!” The call went out at Wayne State, last Friday, April 26, as it did across the world, as students on all continents boycotted classes and staged demonstrations in opposition to U.S. imperialism.

In Detroit, the Wayne Administration put out the call—HEY RUBE! and the campus was soon engulfed by carloads of full-decked Tactical Mobile Units, a half dozen members of the cavalry, a platoon of cops, and twenty six miles of metaphoric barb-wire; called out to quell the carnival. Boy, was it a riot.

It was a carnival—a carnival against war and racism—a carnival of the absurd. Several thousand Dustin Hoffman types and even old Dustin himself were provided with two ideologically differing ways of expressing their alienation. They could buy hats, (Be Clean for Gene) buttons, and all sorts of groovy things; or more radically they could vent their frustration by throwing darts at Lyndon Johnson’s face.

The Great Alliance. Protest can be fun. Radicalism can be respectable.

“The destruction of a troop transport truck or the public execution of a police torturer is more effective propaganda for the local population than a hundred speeches.” (Regis Debray)

Then Students for a Democratic Society blew the whole set. They hoisted up a National Liberation Front flag on the forty foot pole on the campus mall. A swarm of frats came up to cut it down. (Be Clean for Gene) BUT THEY CUT DOWN THE WRONG FUCKIN’ FLAG, MAN. They cut down the U.S. flag. And the spirit of the Viet Cong presided over Lucy’s Lemonade Stand, and the helium balloon concession (what a gas!), and Channel Two said the flag was hoisted by outsiders, but they were wrong cause it was hoisted by Mark Shapiro, the cowboy from Monteith college who forty hours earlier was eating a leisurely dinner with President William (“Billy Rea”) Keast.

The whole set was blown. The blacks crumpled up McCarthy straw hats. “It’s all bullshit!” Rick Davis yelled into the liberated microphone (Dustin Hoffman, who still thinks its 1960 and he just graduated, had just said “People are strange people. Come hear me speak at Mercy College.”) The guy behind us said “He’s a fanatic.” (Davis, not Hoffman) and Sharon Naiman (Stay Clean for Fred) of the Student Mobilization Committee screamer “Raising that flag was a perfect excuse to have the right wing students and the police break up our carnival!” And the South End editorial for that day said “Don’t think for a moment that the strike is significant unless it leads to massive and individual active resistance against the system which produces the things we are striking against.” And as the cops and right wingers broke up the carnival, squared jawed bereted Counterthrust commando straight out of the comic strips told us that contrary to popular rumor there was no right wing conspiracy to break up the carnival. He was smashed in the face (POW!—right out of the fucking comic strips).

RADICAL: “Why did you rip down our poster?”

But it’s not all over; it’s just beginning. 1,000 hundred, 1,000, count ‘em, high school students swarmed over the University mall. 600 of them from Cass; several hundred from Northeastern; only fifty from Denby (because the cops used MACE!), and swarms of kids poured over the mall while the Pig Fuckers swarmed over everybody’s brain with several up front jazz sets. Some patriots tries to bring the fuckin flag pole down, but they couldn’t because it was too hard and erect, just like a blue blooded all—American male, which shows that America’s strength, lacking “flexibility,” is its weakness. The cops blocked off Cass Avenue, and Cindy of the Flowers stroked the neck of this black cop’ s horse, and the guy didn’t know what to do, so he nervously smiled while the cop infantry marched through the crowd with their night sticks held out front. (“The medium is an extension of the body”—McLuhan). That black cop will desert tomorrow.

Duncan Sells, Dean of Students, (who has an identity hang-up with Dustin Hoffman—Question: What do you do when you get out of college Dunc? Answer: You stay in college and play student leader ) called the hook and ladder division of the fire department to save the national honor. The firemen brought down the Viet Cong flag, and they threw it to the Americans, who burned it while the troopers rode around in a protective circle, and sang the star spangled banner (spangle!), and afterwards some youthful radicals barricaded the sacred spot with park benches, and we asked them why they were doing that and they said:

“Because an idea died here,” and we just said “Do you really believe all that symbolism shit?”, because some people thought that because the Cong flag was up, the area was truly liberated, and other people thought because the American flag was cut down (by Americans) America had lost its virginity.

It had, you know, but this was only the first step.