YPSILANTI, Feb. 20 — On this cold Thursday morning over 100 black students seized the administration building of Eastern Michigan University and chained themselves inside. 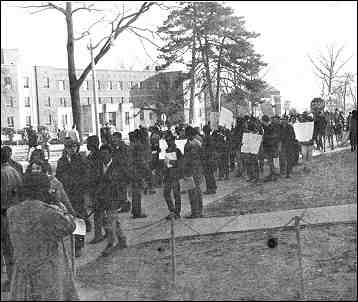 After a one hour occupation approximately 100 riot-equipped Washtenaw County sheriff’s deputies sawed their way into the occupied building and busted the “leaders” of the demonstration. A list of people to be arrested had been drawn up by the university president the night before.

Black demands at Eastern include increased black enrollment, tuition based on family income, and a black studies program.

SDS and other white groups were outside picketing and making plans for further action later in the day.

When the “prisoners” came out of the building in the custody of police, demonstrators clashed briefly with the pigs as they led their victims away. Two white students were arrested while they attempted to block the exit of the police van.

As the number of students outside grew to 590 they re-entered the administration building with plans to sit-in all night, but when news reached them that the arrested 13 students had been charged with “conspiracy” and “inciting to riot” their tactics changed.

They left the building and began to collect bail money for those arrested, and within four hours $500 was collected and the brothers were bailed out.

That night 900 students marched around campus snake dancing their way to the president’s house, chanting “Strike” and singing the Black Panther song “The Revolution has Come.”

On Friday 350 pickets circled the administration building while black leaders negotiated inside. The number of strikers grew to almost 2,000 as demonstrators marched through classroom buildings, into dorms, and through the student union.

Negotiations broke bitterly when the administration refused to drop charges against those arrested the previous day. The student senate at Eastern Michigan has endorsed the strike action and at this writing organizing and fund raising projects are still going on.