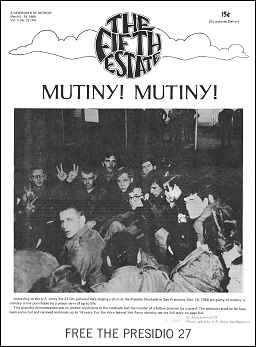 According to the U.S. Army the 27 GIs pictured here staging a sit-in at the Presidio Stockade in San Francisco, Oct. 14, 1968 are guilty of mutiny; a military crime punishable by a prison term of up to life.

This peaceful demonstration was to protest conditions in the stockade and the murder of a fellow prisoner by a guard. The prisoners tried so far have been convicted and received sentences up to 14 years. For the story behind this Army atrocity see the full story on page five.