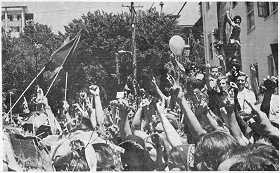 Part of the Memorial Day march of 50,000 to demand the return of the People’s Park. The Berkeley City Council has agreed to give half of it back. Photo / Annie Kransdorf

The thunder of the drums is building. By now, under the full Sagitarius moon, they are wailing with sticks, rocks, beer cans, shovels, and bloody fists at trash cans, wash tubs, concrete and steel grates, their bodies writhing—Strip Naked and Faint!—hugging the flesh of every dirty wet pores open brother and hard-nipples sister in the explosive joy that we have finally overcome their separation, kossack-kicking and whooping around the campfires of Insurrection City.

Don’t step in the vegetable garden. Rhythm holds the powah! Two hundred free gallons of Mountain Castle wine and bonfires in the streets, people fucking on the newly sodded “lawns” of their canvas homes, dopesters directing traffic, children get high, over-thirty neighbors get down, and the rhythm is of such an intense frequency that it burns through matter, through flesh, through the spirit.

Rhythm has the powah to make total frenzied freedom madmen out—open your gullet and pour it straight down drown the gasps, and like napalm it rolls over the frontal lobes of your brain, a down but out-rush, and the thunder of three thousand maniacs in a swirl of fiery dust, dancing into the very flames, human flesh singes, supplicating the fire. Incantations! Jesus! Freedom!

And the metabolic explosion controls heartbeat, central nervous systems, and the energic thunder throbs magic! through all flesh and matter, floods up to dampened brains, numbs egos, drowns out all but the orangatang howling of madmen...

This is our victory dance—“savage...bestial...Bachanalian revelry” the straight press called it—this incredible scene under the aegis of a full Sagitarius moon which came out of Scorpio just in time to save Berkeley from a holocaust, such a scene was never seen since they killed the freedom of the redman, we won, motherfuckers, we won, and those jive ass motherfuckers who don’t even know we won in Berkeley are nowheres.

You can’t see through the smog yet, but through

They have ravaged our minds so, that you don’t even know

We are a people now, a generation of mutants

Whose drive is to Total Freedom, beyond all the categories of their starched lives. Can’t you see

Who your brother is yet?

All we wanted was a little piece of turf to lay in God’s sun, a place for our weird longhair children to play.

All we wanted was a little place where life could grow in the cracks between the concrete.

We collected several thousand dollars of our money and had labored behind shovels, bulldozers, calloused fingers to—

“Begin to build the Man of the twenty first century.”

“We can’t tell yet whether this march will be a buckshot or a birdshot riot.”

“As a resident of Berkeley and as a physician, I never expected to see these kinds of injuries in civilian life.”

—Doctor in the SF Examiner

—Page one headline, May 24, SF Chronicle

—cop, morning of May 30, who never got the chance.

By high noon the streets of Berkeley were deserted, except for fifty thousand people who had come together behind a coterie of American flags and about 75 motorcycles, and several’ trucks of sod.

“No, I’m not afraid to die, I know, I seen the hunting rifles and did you see the Browning automatics? But I’m just not afraid anymore.”

—flag-bearer, straight and over thirty

“We will use any force necessary.”

The headlines were warning of mass slaughter. Straight citizens were terrified, and paralyzed. For the first time, they began to realize just how paralyzed they were. Here the authorities were sanctioning mass murder, and while they opposed it, there was nothing they could do.

But fifty thousand people from all walks of life came together to confront, not just an Evil power, but their own souls, their own death, and the community of love and blood which ran even deeper.

This was going to be Reagan’s finest hour. He was going to push it to the wall, faster than even Nixon was doing—and those old arteriosclerotic celibates were moving fast to the total suppression of youth and life.

“The flowers are a gift of the Quakers, there’s thirty thousand we brought today, take some, and spread them around.”

“I’d say about a hundred of the medics are from the Episcopal Free Church. The rest are physicians, med students, nurses, about three hundred in all, and we’ve got emergency stations all over the city today.”

—an old black man putting down some political dude that afternoon.

“Any confrontations back there yet?”

—The same dude, a half hour later, sitting by the side of the road.

“Look, we’ve been working a twelve hour shift for the past two weeks, and I don’t even have time to water my grass, much less spend time with the kids. When you’ve been working like that, you’re tired, and you’re irritable, that’s all.”

—A Berkeley cop that afternoon, flower in his lapel

Reagan miscalculated. He truly thought the whole thing was being spearheaded by the same elite who “organized” the Chicago confrontation.

Reagan thought that the “radicals” were running the People’s Park and that he could destroy them with a bloodletting that would be followed across the country, just as his use of helicopters and nausea gas (another police state first!) were used in North Carolina two days later.

“The groupies, the hippies, the heads, the ‘Asian Scholars for the Park,’ the SDS, the motorcycle freaks, the derelicts—everyone who is the community of Berkeley drifted through the firelight to settle down on the bare earth and release good vibes.”

This generation was born to a Revolution of total freedom. The astrologists know this. The sociologists know it. So do the sick old men, who can’t fuck, get high, get down & live. Young kids aren’t fools no more. The old fuckers can’t hide their crinkly money and their lies anymore, and we aren’t going to slave in their factory jails offices to get a little piece of it nomore.

Marshall McLuhan says that we view our environment through a rear view mirror, never really understanding what is happening in the present. The old people who run this country, the schools the plants the department stores and the jails, are having a hard time hiding this fact anymore. And as soon as people start putting everything together...

This country is falling apart at such a rapid rate that we better concern ourselves with building the new America, the real, free America. The old institutions are falling apart by themselves, kids aren’t taking any bullshit anymore, you don’t even have to run a rap to them. They smoke dope and they see.

Comic strips always pretty accurately reflect the attitudes of most Americans, and you know how the comic strips have always portrayed hippies and beatniks and bike freaks. Have you dug Dondi lately? Dondi, the kid who never grew up (none of us will anymore) is fighting to save his park from the bulldozers of this old capitalist with rings on his fingers, J.J. Jax.

The deepest malaise of American society is powerlessness. No one has any power over his life in America except the very rich who run the whole show.

Maverick Mustangs They are even telling you now

They are so desperate, that true freedom

Grows out of the barrel of a

Americans have long tried to salvage their manhood by becoming cynical, “cool,” detached. Americans don’t believe in anything, much less their own country or themselves. They know the society of sterile zombies is fucked, but they think they can’t do anything about it.

But they can—as the old authorities disintegrate, people realize that all they have to do is take the power—not over other people, that’s the old people’s game—but power over their own lives. It’s against their law to smoke dope or eat chicks, but who’s afraid, man, to do either?

Sunday after Memorial Day, the moon was in Capricorn, and me and my old lady had just seen “Monterey Pop” at the matinee. We were sitting under a eucalyptus in Golden Gate Park, enjoying a joint that had been laid on us by the cat that picked us up hitch-hiking.

Not many hours later, I would be on a plane to Detroit to cover White Panther John Sinclair’s trial. There I would learn that an event of similar significance to the People’s Park had taken place Memorial Day—the Rock and Roll Revival at the Fairgrounds, a cross cultural event. We had all been tripping on the events of the past week. We talked slowly, eating figs and cracking peanuts. And I tole her,

“You know, we’re not fighting alone anymore, we got a people now.”

And we do, brothers and sisters, and we do.

Art Johnston is a member of the White Panther Party.