Hot Town—Pigs in the Street

It’s over. Nobody really came out ahead. Washtenaw Sheriff Douglas Harvey became Pig of the Year and liberal Ann Arbor Mayor Robert Harris and U-M President Robben Fleming both lost many points with their respective constituencies. Sixty-nine people were busted in three days of street fighting and more than 100 were hurt. 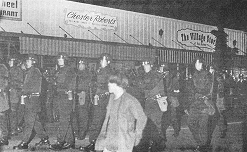 The Trans-Love SUN reported the beginning of the whole thing Monday as follows:

“Last night, June 16, at 8 PM about 50 brothers and sisters were getting together on South U... enjoying ourselves drawing on the sidewalk in colored chalk and diggin’ the motorcycle people riding by doing wheelies and just generally gettin’ down, when one lone pig showed up and attempted to bust a cycle brother in a gas station. The people charged across the street and surrounded the pig yellin’ to the motherfucker to let the brother go. It was too much for the punk to handle.

“He got on his trusty radio and in about five minutes there were about 10 pigs moving everyone back across the street. By this time there were 200 to 300 brothers and sisters movin’ about. Then the pigs decided it was hopeless and they split. The people flipped, the brothers got off, and the street was theirs.”

The majority of street people who inhabit the two or three commercial blocks on South University are high school students and college-age freaks. Being basically anarchists, they are immune to usual brands of campus radical politics. And it was these people who were the most fascinated with the prospect of liberating the street which they proceeded to do.

Barricades diverted traffic and there were fireworks, a lot of wine and beer (very little dope), more cycles, and—an Ann Arbor first—fucking in the streets. It appeared indeed that the “people” were well in control of the situation.

But the thought that kept reoccurring to the 800 celebrants and spectators as they milled around throughout the chilly night was “where are the cops?”

The party broke up at about 1:30 am, and White Panthers removed the barricades and swept the streets. Discount Records didn’t even seem to be pissed about their broken window—the only noticeable damage.

So Tuesday night, about 8 pm, maybe a third as many people showed up and proceeded to block off South U. at S. Forest. Then a line of Ann Arbor police in riot gear formed on the other side of the barricade and just loosely stood there watching, while beyond them in the next block the reserves began to assemble.

Many remembered these trained killers from last October’s sit-in in support of county welfare mothers. Thirty royal blue cars parked along the Washtenaw Ave. thoroughfare and belched out State police.

This scene was obviously more interesting than the block party, so the people wandered down to gawk at the M-16s and pet the pretty German Shepherds.

After the deputies had put out their cigars, Ann Arbor Deputy Police Chief Olson gave the warning to disperse or be dispersed. Then began the only co-ordinated operation by the five armed units.

They charged west of South U. to East U., the corner of the U-M central campus, then turned around and came back, sweeping up people on the sidewalks.

It was an almost effortless maneuver, but anybody that resisted was arrested and dragged to the waiting police bus.

At this point it became a crime to be on the street—any street in the area. Harvey’s creeps started the tear gas thing south on Forest ostensibly to clear a parking structure.

Deputies provided a light show of flares for the crowd of now mostly students by shooting flares into the trees at East and South University.

This was followed by the heaviest gas barrage of the night as the guys in the pig masks hurled the cans ahead of them and marched through the smoke.

Out in front of his house U-M President Robben Fleming had negotiated a mutual withdrawal pact with Olson, who was supposed to be in charge, when suddenly out of nowhere came a truckload of Monroe County regulars on Sheriff Harvey’s independent order. Their uniforms resemble National Guard, and that sight instantaneously destroyed all hope for control and cool in the situation. There followed more gas and a lot of the brutality that Detroit newsmen found so remarkable, as pigs ignored press credentials to clobber anyone they could catch.

Around 12:30 am police regrouped on South U. facing the people, who filled the intersection and overflowed onto the Diag. It was a standoff for about 45 minutes, during which President Fleming and others made pleas for calm.

Ken Kelley, editor of the Ann Arbor Argus, over Olson’s megaphone tried to get his brothers to go home, belaboring the obvious, that one more clash would result in broken heads.

But the people weren’t buying. They were sick of the pigshit that had been going down all night and felt there was still a point to be made. A few rocks flew into the most incredible phalanx of armed force ever assembled on the fair streets of Ann Arbor.

The heat gave everybody 15 minutes warning. Fleming went up to Harvey.

“I don’t think that’s a good idea. Let me talk to them some more,” he said to the glassy-eyed sheriff.

“Look, my men are getting clobbered while you’re talking. I heard you were a bastard, but I didn’t know you were this bad,” Harvey snapped back.

Fleming reiterated that he felt clearing the street was a poor tactic and that he “would be forced to make a statement to that effect.”

“I don’t give a goddam what statement you make,” the sheriff seethed. “We’re not playing games anymore.”

About 5 minutes after the warning had been given, one of the Ann Arbor troops was felled by another projectile.

It was the final charge of the night—repeated sweeps in three directions out from the intersection with unmitigated viciousness. What do cops get from beating prone bodies? Do their wives put them that uptight?

The hassle south on East U. was pretty hairy, but might makes right and so everybody went home (except those 45 who were busted.)

The next day, there was a rally at noon on the campus. More than 50 people spoke.

The rally disintegrated. Some people left for City Hall and were never heard from again. The street people remained leaderless and each with his own individual plan for that night. Some medical students organized street first aid teams for the evening.

The University and various student organizations had hired three area rock bands for a concert to be held that evening on campus. The cops had promised not to bust. Harris and Fleming would be there to answer questions. It seemed to keep people off the street, but then there were probably a hundred riot troops lining the streets in the area of Tuesday’s battle.

A hovering Harveycopter and word of Monroe County’s anti-personnel tank brought over a thousand spectators into the area.

After the “street dance” after everyone had his intellectualizing about the thing out of his system, people started bopping down the street and rapping with the cops. “A carnival atmosphere prevailed.”

Then, surprise, surprise, the occupation forces disappeared! All of them! There were still hundreds of people on the sidewalks, but the cops split.

Many of the hundreds of people congregated at the intersection of South U. and Church and kind of overflowed into the street. They were a handful of street maniacs and a whole lot of drunken University people, probably most of whom had missed the action on Tuesday.

Maybe they thought they had liberated the street. But there were spies on the rooftop and pretty soon our police state’s eye-in-the-sky was back checking it all out.

The most bizarre incident of Wednesday night involved a car driven by a lady who struck a young man who was thrown on the hood of her car. She sped away from the intersection throwing the man from the car and disappearing into the night.

Whether it was because of this incident or just the fact that people were in the street again, the troops returned. Charging from both ends of the street, the armed demons splintered the crowd and effectively ended Wednesday night in about half an hour. The quick but thorough operation involved busting people in their houses and search-and-destroy maneuvers in alleys between the buildings.

Later that night, as the throng came down to see what was happening, they found no riot troops, just a bunch of people in suits and ties rapping with the people.

Mayor Harris, during the day, had managed to secure supervision over the Ann Arbor police. The first thing he did was ask Sheriff Harvey to stay away.

Harris then placed 150 Ann Arbor and Michigan State troops on stand-by out of the area and walked the streets himself with White Panther members and a good-sized corps of University professors. Traffic flowed smoothly most of the evening, and there was a lot of paranoia, but another bust never came.

And since it was the people’s street again that night, the people swept it after everyone left. The nights the pigs were in control of the street, they were left filthy.

The weekend passed in the quasi-calm that is an American police state. Ten or twenty helmeted Ann Arbor regulars walk around nightly and chat with people.

But this is the first time things have become really heavy at Michigan, and it provided a first-hand experience for those who couldn’t really believe what they read in the papers.