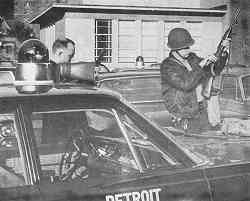 Detroit Police Commissioner Johannes (The Lover) Spreen has called for another “love in” to improve police relations with the community.

His last love in was pretty much of a flop with the New Bethel shooting coming right in the middle of it, so Jo is trying again.

Spreen is a wonderful public relations man and seems sincere in wanting to ease community tensions. The only problem is that he is not in effective control of his force (the reactionary Detroit Police Officers Association is the real boss) and most Detroit cops are going about their 24 hour a day, seven day a week hate in.

The police, if anything, have gotten more abusive, more brutal and more uptight since Spreen’s last campaign for love.

One of the practices that has particularly concerned inner city residents both black and white, is the brandishing of carbines, automatic weapons and shotguns by police in even minir incidents.

The Fifth Estate spoke to Chief Inspector Anthony Bertoni, best known for his skillful handling of the Wallace demonstration massacre, about the problem.

According to Bertoni the issuance of long guns to all cars is part of “a routine weapons deployment.”

All precinct cruiser crews (the Big Four) carry machine guns as well as shotguns, but are not, according to Bertoni, “authorized to fire the machine guns on fully automatic.” Nice to know.

30–30 caliber M-1 carbines are now being issued to all cars as soon as they are purchased and are filtered down to the precinct patrol cars last. They are carried either in the trunk or strapped to the dashboard.

This slow procurement process, however, has not stopped individual police from carrying their own weapons while waiting for department issue. Neighborhood residents of Hancock and Fourth Street in the Warren Forest area reported to us that officers from the 13th Precinct came to investigate a minor squabble with M-1s at the ready.

One cop had an exotic paratrooper collapsable stock and had it at the ready the whole time he was on the scene.

Bertoni denied any knowledge of the peculiar looking weapon and said he was going to look into it. “I’m curious about that myself,” he said.

Authorization for long gun use includes delegation to use it at the “officer’s discretion” and the Department issues “regular bulletins” instructing officers on the use of the weapons.

Bertoni denies the existence of machine guns in any cars other than the cruisers because, he says, they are not “effective” enough.

“They’re just good for spraying. You can’t hit the side of a barn with a machine gun. They’re dangerous,” he added. So why does the Big Four have them?

The purpose of this article was not just to inform readers about how many carbines the Detroit cops are toting around, but rather what the implications are of them being toted.

Such weaponry as carbines, M-1s, M-14s, and machine guns are definitely not intended for routine use in apprehending fleeing suspects or defending the lives of policemen.

These are tools of war that have the intent of terrorizing the population or beyond that the annihilation of the enemy. That’s US.

Spreen can’t call for a love in on one hand and prepare for war against the populace at the same time. He must choose and if he doesn’t the choice will be made for him—in the streets.