The Real Radicals in the High Schools

A recent issue of Scope magazine carries a bullshit hype by Peggy Cronin called “The Young Radicals In Our High Schools.” In the article Miss Cronin attempts to show how high school activists are “not quite radical.” She went to two individuals, one from Cass Tech and one from Seaholm High in Birmingham, to give her an “objective” analysis of the high school situation. 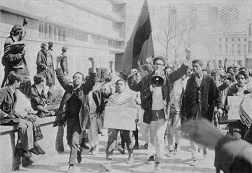 Miss Cronin did not speak with people in the high school liberation movement in this city, even though the most radical and revolutionary students are the ones who are really doing lasting and effective work.

She did not speak with anyone from the Black Student Liberation Front or any other black student organization.

Are the only high school radicals white middle class kids?

She ignored High School SDS, the National Organizing Committee’s high school organizers, the White Panthers, the radical student unions on the northeast side, students around the old Cass Student Voice, the students who led the East Detroit High School sit-in, the Denby activists...I could go on for pages and pages listing radicals and revolutionaries who were not consulted.

Instead, she talked to Dennis Rosenblum, a founder of the so-called Cass Student Association, an irrelevant organization at best; a reactionary organization in fact.

The writer talks in glowing terms of the Cass Student Association—which was, from the beginning, an elitist, bullshit group. It was founded around the issue of keeping Cass an elitist school in 1968.

What happened was that the Board of Education as a tokenist measure, wanted to take the Performing Arts and music curriculums out of Cass and transfer them to Northwestern, which would have ended Cass’ reign as the Elite School attended by the “cream of the crop.”

The CSA was victorious in its battle (with its ally, the parent/teacher/administration Cass Association), and has never left liberal politics since then. A junior PTA to the end.

As Rosenblum says in his interview, “Basically the students, even the radicals, are apathetic.” This is true at Cass. And the reason for this apathy is because of the fucked-up elitists and liberals at that school. Such apathy is not near as evident in schools where Brothers and Sisters are truly getting down in this city and throughout the country.

All of these criticisms are only peripheral to my main attack on Miss Cronin’s article. The main thrust of her fantasy is that students are rebelling because of some weird “generation gap” which can eventually be worked out, and because the education we are receiving is irrelevant, another problem which the capitalist class can eventually resolve.

This conclusion flows not only from Cronin’s research, but more importantly from her unrevolutionary and liberal analysis of society, the same world-view which has shown to be reactionary in times of change (meaning now).

The shit coming down in high schools is not caused because education is irrelevant, but because the class contradictions between the people and the rulers has become so blatant.

For example, the tracking and curriculum systems are used to channel poor black, Chicano, and white students into low-paying shit-jobs that have to be done, into the military to be used as cannon-fodder in imperialist wars, and even into unemployment to fulfill the need for a mass work force which is constantly in and out of work as the economy expands and contracts.

Also, racism is used (on top of the curriculums being thoroughly racist) to divide students within the capitalist machinery so as to fulfill the role that racism has played throughout capitalist history. And that is to divide the working class through skin privilege, a problem that must eventually be overcome by the working people before we can bring the Mother Country down.

Young people’s minds are subverted in the constant ideological battle that the capitalist class wages against the people. They are submerged in lies, the falsification of history, irrelevant and tedious bullshit, racism, national chauvinism, and anti-communism. And this “journalist” says that our education is irrelevant! It is very relevant, and that is why the schools must serve the people and not the tiny minority of parasites who run this country.

This is the perspective that high school revolutionaries have; to use the school in the manner that the rulers use it, as a weapon of class power, in the struggle for freedom and socialism on this planet. High school students must realize that they are oppressed as young people within the working class, not just as young people who happened to be fucked over by old people.

This must be the basis for our struggle, not some phony, elitist call for “student power” which only recognizes the privilege that students have over their Brothers and Sisters, and tries to maintain that privilege. Fuck that privilege! We want freedom for our people!

Although Miss Cronin mentioned other students, the Cooley Student Union and the Free Verse newspaper from Plymouth High, she talked with no one.

She instead quotes a student from Seaholm: “We are not militants or troublemakers. We actually believed we were doing something for the school.” And Rosenblum, “I’m not trying to destroy the system.”

We revolutionaries are trying to destroy the system! It is a system of war, exploitation, racism, and alienation. It is a system where people are not in control of their own lives. It is unsalvageable because the only way for people to control their destinies is to hold the means of production in mutual ownership.

That mutual ownership is socialism, and socialism; cannot exist as long as the means of production are owned by the Rockefellers and Fords and not the people who actually work to create goods for the use of everyone.

The United States is in its death-throes because its economy is crumbling. It has reached a level of development where it can send millions of soldiers around the globe to fight in imperialistic wars to defend the profits of the capitalists. But it is losing these wars and these imperialistic profits.

The U.S. has already lost the war in Vietnam—the politicians are now arguing over when to split, not whether they should split.

U.S. profits are waning in Europe and Japan, because these nations are actually competing in World markets against-the United States. -In fact, for the first time since World War I, the United States is importing more goods than it is exporting, and the squeeze is being felt here at home.

This is why workers are going on wildcat strikes and black communities are exploding. It is because the contradiction in capitalist economy is being felt more than ever, and people are getting uptight. The U.S. economy cannot have its ears pinned back throughout the world without the capitalists having to tighten up back in the Mother Country, through cutting wages, higher taxes, a higher draft for futile wars, and through even breaking unions who get in the way of the Machine.

Workers (black and white), GIs, high school students, oppressed minorities, and college students are all in motion to one degree or another to make radical change and to ultimately replace the decadent system of capitalism with socialism.

We high school students read about and observe the exploitation and oppression of colonial peoples throughout the world. We see the economic competition getting fiercer every day. We see our Brothers carted off to foreign lands to fight in imperialistic wars which are only in the interests of the parasitic capitalists.

We see blacks rebelling against racist exploitation and oppression. We see the inflation and rising taxes and wage freezes. And we see our own oppression as youth, told how to live and think and what to do with our lives.

We are in motion also. Many of us become revolutionaries because in our dedication we understand that it will take a revolution in this country to make any worthwhile change. The history of humankind is the history of revolutions from one society to another. The transformation of society from capitalism to socialism will be no different.

Others, like those interviewed, don’t want revolutionary change. And their politics makes you understand why they feel as they do. They are elitists, those who will get ahead in this society because of their many talents.

The rulers of Amerika need rebels who are not “too” rebellious, to siphon young people in a direction of the same old shit for another generation. It is easier for the talented to be one of these rebels—without any analysis, without any allegiance and without any identification with oppressed peoples.

But it is a sell-out of the highest degree. It is placing one’s ego over the needs of a mankind of Brothers and Sisters—and that choice is one no conscious individual can make.