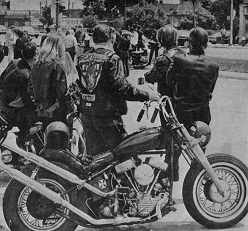 The White Panther Bike Run and the people’s party at the U-M Arboretum July 6th turned out to be a quiet get together of freaks and young people without the usual interference by the pigs.

Things started at 1:00 that Sunday afternoon as 50 bikes split from the Fifth Estate office off to Ann Arbor.

Following in their sound waves were several carloads of people who came along to dig the scene.

Everyone was dreaming about the next battle with the forces of law and order in Washtenaw County with the sound of high energy rock in the background.

Since the pigs had revoked the permit for bands to play in West Park, the gig was moved to Arboretum where people could find more protection from police riots.

As it turned out the only thing beating down on the crowd of about 400 was the sun. The afternoon was calm and instead of screams and sounds of battle the only things heard around the park were numerous bongos and homemade drums with a few guitars being plucked.

Although the cops weren’t out in force, there were 400 pigs in the area and all leaves were cancelled for cops in Washtenaw County providing a large stand-by unit of reserves. The strategy of the people was simply not to provoke the cops into smashing heads.

Apparently last month’s pig riots were too expensive (they cost the taxpayers of Washtenaw County alone $10,000 in overtime to pay the shock troops) so the pigs were ordered to maintain their cool.

Legal steps are being taken by the White Panthers to regain the permit for outdoor concerts in the Park.

As John Sinclair, Minister of Information of the White Panthers, commented, “It’s up to them to show what fools they are and to show who really has been starting the shit that’s been coming down.”

The people have decided to let the Man show any good will he might have. Nobody should hold their breath.