Street people get it together 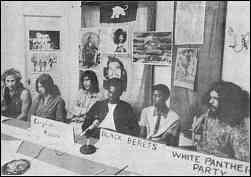 Representatives from five Ann Arbor revolutionary groups convened at Trans-Love Energies Monday, August 11, to announce to the press the formation of a working coalition of the White Panther Party, the God’s Children motorcycle club, the Black Berets, Sunnygoode Street commune, and the Congolean Maulers.

All of the groups in the newly-formed alliance have felt intensified police harassment and busts more and more in the past few months, and it was decided that illegitimate, politically-motivated pig harassment must be combated co-operatively and with the total strength of the combined groups.

Each group has taken note also of the sharp rise in the use of smack (heroin), speed and other death drugs in our communities and has joined with the others to move to educate the people about the true nature of these debilitating, hard narcotics and their function as a part of the capitalist ruse to divide and control the people.

It’s no secret that the pig has gotten out of hand and it’s no secret to anyone who has learned the lessons of history that if something is not done right now to put control of the police in the hands of the people we’re all going to have to kiss our freedoms goodbye.

The thrust of their combined efforts will be the implementation of the proposals of the United Front Against Fascism, i.e. a massive petition campaign for community control of police by means of amendments to the city charter to decentralize the police and establish separate autonomous police departments for the various communities within the city under direct and continuous control of the people themselves. A summary of the proposed amendment appeared in the July 24-August 6 issue of this paper on page 9.

The alliance also committed its active support to the petition campaign to recall Douglas Harvey, the notorious outlaw sheriff of Washtenaw County.

The coalition plans to expose to the people the nature and extent of the pig plot behind the suppression of marijuana and the simultaneous increase in the influx of death-dealing drugs into the community.

Smack and speed dealing is a big business, and like all big businesses in Amerika its function is to suck enormous sums of money and energy from the people and to subjugate them to dope/ commodity slavery to render them powerless against the pigs who control their lives.

Most of the hard drugs in our communities come from the Mafia, working in collusion with bought-off pigs to choke off the flow of the cheaper marijuana, LSD & other highs and to create a market of the fools among us for the killer profit-making junk.

They make all the profits and we suffer the expense: destroyed minds and bodies, rip-offs, burns, uptightness and division of our young energies. The members of this coalition feel it is their responsibility to promote strength, unity, and welfare among the people and as revolutionaries work to rid our communities of smack and speed.