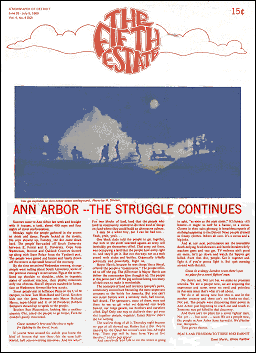 Summer came to Ann Arbor last week and brought with it teargas, a tank, about 400 cops and four nights of street confrontation.

Monday night the people gathered in the streets to drink and dance. People fucked in the streets. No cops showed up. Tuesday, the shit came down hard. The people barricaded off South University between E. Forest and E. University. Cops from Washtenaw, Monroe and Oakland Counties showed up along with State Police from the Ypsilanti post. The people were gassed and beaten and finally driven off the streets in the small hours of the morning.

By the time we arrived Wednesday evening, strange people were milling about South University, scene of the previous evening’s street action. Pigs in the street, lined up shoulder to shoulder, clubs in orgasmic states of constant erection, their phallic intentions only too obvious. Sheriff deputies marched in formation on Washtenaw Avenue like boy scouts.

Street people met at Jefferson Plaza on the U of M campus, to hear Tate Blues Band and Carnal Kitchen kick out the jams. Between sets Mayor Richard Harris, super-liberal and U of M President Robben Sommers showed up to speak to the people.

Brother Pun Plamondon, looking like a mother-country Cite, asked the people to go home. Even he couldn’t pacify this crowd.

Cause summer’s here and the time is right for fighting in the street, boys.

If you’ve been around for awhile you know the kind of tension that was there; felt the same half-scared, half action-wanting emotions. And for what?

For two blocks of land, land that the people who lived in community wanted to do their kind of things on; land where they could build an alternative culture.

One black dude told the people to get together, that kids in the street unarmed against an army will inevitably get themselves offed. That army out there, was occupying a land that the people have every right to. And they’ll get it. But not this way; not as a mob armed with sticks and bottles. Organically tribally politically and powerfully. Right on.

Mayor Harris, because he sees things like a liberal, offered the people a “commission.” The people offered to off the pig. The difference is Mayor Harris can deliver the commission (jive though it is). The people at this point can’t off the pig without losing too many of their own to make it worthwhile.

The concepts of land and territory (people’s parks, community control) are becoming the most important concepts in the battle for Amerika. But you can’t win street battles with a slovenly mob, half tourist, half drunk. The spectators, most of them, were out there to see us get what we deserved—our heads busted, our lungs gassed, our brothers and ourselves offed. Dig? Only one way to deal with that—get your shit together people, organize. James Rector didn’t die for nothing.

The scariest thing of all is Thursday night because no pigs at all showed up. Rumor has it that they’re massing by the Quad but no one’s seen ‘em. All night long, “State pigs will be here from Ypsi in five minutes,” and no pigs appear.

And everybody you calk to on the street is going to split, “as soon as the cops come.” It’s lunacy—it’s bizarre—it might as well be a bazaar, or a circus. Clowns in their suits phoning in breathless reports of nothing happening to the Detroit News people dressed in freaky clothes. Bikers all over. It’s a circus and a big joke.

And at our next performance see the incredible death-defying brick-throwers and bottle-breakers defy machine guns and tear gas. TV violence ain’t good no more. let’s go down and watch the hippies get killed. Fuck that shit, people. Get it together and fight it if you’re gonna fight it. But quit messing around with this shit.

Cause in a sleepy London town there’s just no place for a street fightin’ man.

No there’s not. Not yet but we make no promises amerika. We are a people now, we are acquiring the experience and street sense we need and pointless as this may seem that’s what it’s all about.

We do it all wrong now but this is war in the mother country and there ain’t no books on that. Not yet. The people were discovering their power in Ann Arbor; just beginning to reach out and touch it. Someone may get killed in that discovery.

And there ain’t no place for a street fightin’ man. Not yet...but soon...soon. We are a people now, the people in Ann Arbor have learned it. We’d better too, like quick.

PEACE AND FREEDOM TO THOSE WHO EARN IT